March is a strange time of year. It heralds the arrival of spring, but some of us are not out of winter’s icy grip just yet. The New York Times Food team cooked accordingly. While we still turned to hearty meals — seafood stews, a big pot of beans and birthday baked ziti — we also dipped our toes into the pool of spring produce. (A full-throated hello to our dear friend asparagus.) Here are our favorite recipes we cooked last month. 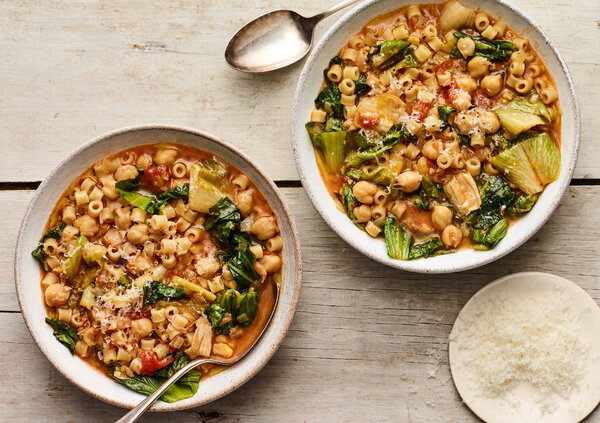 I cooked a lot of old standby dishes in March: Alana Kysar’s huli huli chicken is always a winner. I use boneless thighs and roast them on racks in the oven. (Come summer, I’ll grill them.) Colu Henry’s pasta e ceci is a great 30-minute meal, so I make it a lot, but my 6-year-old has developed an aversion to chickpeas, so I substitute cannellini or Great Northern beans — and sometimes I add a big fistful of frozen meatballs. Finally, I love all of Kay Chun’s meatball recipes, but last month, I made a double batch of the pork meatballs with ginger and fish sauce. MARGAUX LASKEY

For my daughter’s birthday I made her favorite baked ziti (from Alison Roman). It’s one of the few meals that satisfies everyone in the family, and it’s so good! I usually make the sauce, but if you’re in a crunch for time you can use your favorite store bought. KIM GOUGENHEIM

At the Food Department’s Atlanta bureau, we are on something of a health kick in a heroic attempt to shed our pandemic pounds. Yet I have made two awesome desserts. For Passover, I always try to make a batch of Melissa Clark’s chocolate-caramel matzo toffee because it punches way above its weight considering how relatively simple and foolproof it is. And every Easter I like to make Edna Lewis’s classic Southern lemon cheese layer cake because it reminds me that spring is awesome. Pro tip: Use Meyer lemons for the curd. KIM SEVERSON

Months of winter pastas turned my fresh wedge of Parmesan into a tough little hockey puck of a rind. So I repurposed it in Melissa Clark’s big pot of beans. Such an effortless recipe: Beans, herbs, garlic and other aromatics, water and the cheese heel went into the pot to simmer; after three hours, the beans emerged soft and deeply savory. I soaked dried navy beans, but canned will do fine. Go easy on the salt, though, especially if using the cheese or a hambone. PATRICK FARRELL

This deep into the pandemic, I’ve reached peak laziness. Enter the grilled cheese. This French onion version, from Ali Slagle, isn’t the most effortless dish — you’re caramelizing onions after all — but it’s much easier than the soup that inspired it. Make a ton of caramelized onions, and save them for later. They keep well in the freezer, and in the refrigerator, and are just as good over a homemade pizza as they are tossed in pasta. KRYSTEN CHAMBROT

6. Cod and Clams in Coconut Nage

A couple of weeks ago, the fish store had some lovely fresh local hake so I used my recipe for cod and clams in coconut nage, swapping out the cod for hake. I also omitted the clams since I opened some littlenecks to have on the half-shell first, and instead added shiitake mushroom caps along with the clam juice saved from shucking. FLORENCE FABRICANT

Eternally craving comfort — but occasionally lazy in the kitchen — I cooked Kay Chun’s smoky tomato carbonara, which suits both needs. Unlike traditional carbonara, her version uses bacon, and adds caramelized tomato paste and sweet cherry tomatoes, which cut through the richness with bright, tangy notes. It’s both familiar and unexpected, and a restaurant-worthy meal that I enjoyed on the couch, in my comfiest clothes. ALEXA WEIBEL

If I could count the layers of magic in Yewande Komolafe’s moqueca, there would be a trillion. Mille-feuille, lasagna and whatever else has layers (Onions? Shrek?) have nothing on this Brazilian seafood stew. As Yewande writes in the recipe’s headnote, there is no substitute for red palm oil’s characteristic floral and savory quality, so don’t skip it. Follow her directions word for word — at least the first time — and taste as you go, if only to appreciate the transformation that takes place in the pot as you reduce the onions, peppers and tomatoes into a jammy bed of concentrated umami. The ingredients in this dish are simple and few, yet the result is absolutely prismatic. ERIC KIM

9. Vegan Bolognese With Mushrooms and Walnuts

This recipe hit the spot on a chilly March evening when the weather was not cooperating with my eagerness for spring. I am always on the lookout for good vegan versions of meaty comfort food, and Alexa Weibel has a knack for creating them. Here, to achieve the richness of Bolognese, she toasts walnuts, combines them with sautéed mushrooms and fennel seeds, then layers in flavor with soy sauce, balsamic vinegar, Marmite and red wine. EMILY FLEISCHAKER

In March, I wasn’t in much of a mood to cook anything elaborate, so I went with my favorite recipe: Martha Rose Shulman’s miso-glazed fish — and as usual, it was delicious. (I’ve now made it at least twice a month for a year.) So, the most exciting recipe I tried was for a cocktail. More specifically, Rebekah Peppler’s amaro sour, which allowed me to really lean into my winter obsession with grapefruit and to invest in a pricey jar of Luxardo maraschino cherries that should see me through summer. NIKITA RICHARDSON

As the weather warmed up I found myself turning away from the hearty meals like soups and stews that got me through the winter months, and relying more on the fresh produce that I like to pile into a big salad or a homemade grain bowl. One of my favorite things to have on-hand that I believe elevates a salad to a moment is the shallot-heavy dressing from the insalata verde recipe that Samin Nosrat brought to The Times from Via Carota. The recipe yields quite a bit, so the dressing made many a guest appearance in my meals all month long. KASIA PILAT

I made Melissa Clark’s shortcut moussaka, subbing in Martha Rose Shulman’s roasted mushrooms for half the ground lamb on one of the last cool nights I’ll likely see until the fall. I’ve been trying to get my young kids to eat both eggplant and mushrooms without complaint. This version of the delicious recipe helped with that cause. So did the fact that I could sell the moussaka as “like lasagna.” BRETT ANDERSON

It was a weird month of cooking for me, a lot of no-recipe recipes assembled on the fly, but I did manage to knock out Sue Li’s black pepper beef and cabbage stir-fry twice, doubling the amount of cabbage the second time, and I think that’s going to happen every month for the foreseeable future. SAM SIFTON

Alexa Weibel, with her roasted tomato tart, was the one who taught me to use puff pastry as a way to clean out the fridge. Puff pastry is a blank canvas, and you have to decide if you are Pollock or Beeple. I had a tub of crème fraîche just about to hit its expiration date, so I swirled in a big spoonful of yuzu kosho and slathered it on puff pastry. Was a whole tub too much? Yes it was. (I guess it was a Rothko night.) But it needed to go, so it didn’t matter. I added some shaved asparagus and lemon slices and baked it till the pastry was done. Decadent, seasonal, delicious. SARA BONISTEEL

I recently moved and am no longer within walking distance of my favorite local bakery here in Brooklyn, so I decided to start baking my own bread to fill the loaf-size hole in my heart. I turned to Jim Lahey’s no-knead bread recipe in my time of need. I didn’t have cornmeal handy, so I grabbed the unreasonably large box of polenta that I bought in a panic earlier in the pandemic and was not disappointed. GABRIELLA LEWIS

I’ve been really into Andrea Nguyen’s mapo tofu spaghetti — the way the tofu gets so creamy and slick when it’s puréed, and the warm, tingly chile and Sichuan peppercorns. I end up adding quite a lot of water to loosen it up and to get the sauce really glossy, which is how I like it, and I also add a little pile of finely cut cucumbers and soft herbs on top of my bowl. As a bonus, the recipe makes more than I need for a single dinner, so I pack up the extra in a couple of eight-ounce deli containers and freeze it for a night when I don’t feel like cooking, but want something homemade and super comforting. TEJAL RAO

Turns out that I only had to make this pernil from Von Diaz and Maricel Presilla once to have it be my most-eaten dish throughout the month. Even though it took nearly a day from start to finish (I marinated overnight), it was only about an hour of active cooking. And it was totally worth it. I can’t wait to make this again for a big party, but I did it for just my little household, which means we had a steady supply of the garlicky, tender meat to use in tacos, sandwiches and fried rice, and to toss with noodles, greens, eggs and beans. GENEVIEVE KO

Tags: Cooking, Recipe, Shelter-in-Plac
You may also like
Recent News: