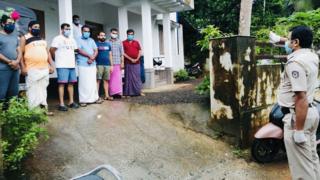 When an Air India Express plane with 190 people on board crashed at an airport in the southern Indian state of Kerala last week, dozens of locals rushed to help. They rescued passengers and took them to hospitals. Officials say this was part of the reason that the death toll was so low. Ashraf Padanna spoke to some of the volunteers.

Fazal Puthiyakath, 32, and eight of his friends were in quarantine when they recently received an unexpected visitor.

It was a police officer who introduced himself as Nizar. Standing a distance away, he told them he had come to pay tribute to their bravery.

“I have great respect for you, but I brought nothing to give you. This is the only gift I can give,” he told them, raising his arms in salute.

Mr Puthiyakath and his friends were among dozens of locals who had rushed to the Kozhikode (formerly known as Calicut) airport, when a repatriation flight coming in from Dubai crashed while landing and broke in two. Eighteen people, including the two pilots, were killed.

The group had helped rescue dozens of people and were now in quarantine, because of the risk of catching Covid-19 from the people they rescued.

An image of the policeman saluting the men as they stood on the veranda of their quarantine centre went viral on social media.

The group say they have also got countless calls – mostly from relatives of people on the flight – thanking them for saving their loved ones.

Mr Puthiyakath, who lives 100 metres (300ft) from the airport, says he was one of the first responders at the site. “There were around six of us who managed to get there within a few minutes of the crash. The gates were shut, and people were crying for help,” he told the BBC. “The security people initially refused to open the gates as firefighters were spraying foam on the plane.”

But with the fire risk dissipated, they were allowed in. Mr Puthiyakath says the scene was heart rending.

“Many passengers were unconscious. Some were stuck under their seats. We needed to unfasten their seat belts and get them out of the plane.”

They began helping rescue workers cut people free and get them to hospitals.

Regional fire officer K Abdul Rasheed, who was at the crash site, said the local volunteers took a massive risk.

“Firefighters at the airport sprayed foam immediately after the crash to prevent fire. But a small spark or lapse could have led to a big tragedy,” he said.

Meanwhile, news of the crash spread through the community via WhatsApp. Dozens more rushed in to see how they could help.

So by the time rescue workers began bringing out passengers, there was a fleet of private vehicles ready to take them to hospital. Officials say this alone saved many lives because hospitals had only a limited number of ambulances.

Fazal Karalil, 33, a truck driver, and also one of those who arrived on the scene, told the BBC that he didn’t even think about the risk of coronavirus at the time.

“We used any vehicle at our disposal, including trucks and auto-rickshaws. There was no time to wait for an ambulance.”

Between them, locals ferried victims to some 20 hospitals within a 30km (18 mile) radius.

“The volunteers took them to hospitals immediately, without waiting for ambulances to arrive. They cared little about their own safety,” Mr Rasheed said.

Dr PP Venugopalan, director of emergency medicine at a hospital in Kozhikode, believes the community action saved at least 10 lives.

“The people in the neighbourhood had received some training in trauma care and how to handle such a situation,” he told the BBC.

“In 2012 the district administration conducted a mock drill on air crashes involving some 650 people, which I think was the biggest in India. The [Air India] plane fell exactly on the same spot.”

“It took one month to train the local community members, including taxi drivers. Everyone received hands-on training. I think that also helped to reduce the casualties.”

Some 200,000 people in Kerala’s Kozhikode and Malappuram districts have received training in primary trauma care and early resuscitation. 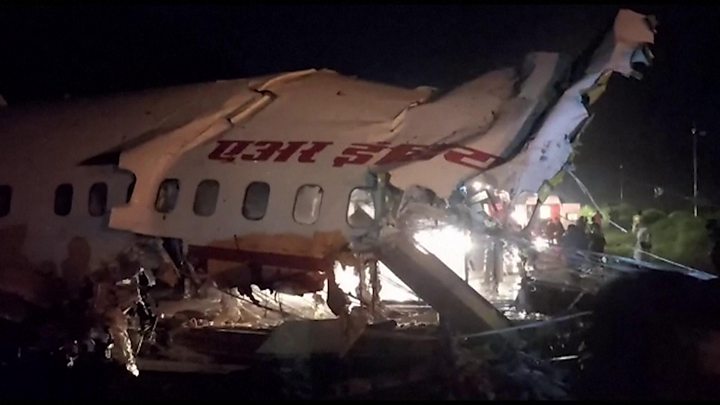 Dr Venugopalan said that the community response was so efficient that most of the ambulances he sent returned empty from the airport as volunteers had already rushed the passengers to hospitals in their private vehicles.

Meanwhile, apart from getting them medical attention, locals also helped passengers who were desperate for news of loved ones and family who had been with them on the flight.

“We immediately formed a WhatsApp group of rescue workers and posted whatever information we received so that they could find out if their family members were in other hospitals,” Mr Puthiyakath said.

By the time he got home, Mr Puthiyakath added, it was around 3:30 in the morning. They reported back to police at the site of the crash a few hours later, and were then admitted into quarantine.

Since then, they have all been treated like heroes – their stories featured on the social media feeds of prominent journalists and celebrities.

“People are now showering us with love and affection after we entered the mandatory 14-day quarantine. They send us good food every day,” laughs Mr Karalil.

Justice Devan Ramachandran of the Kerala High Court penned a poetic tribute to the locals who volunteered on a news portal dedicated to legal matters.

“Gods came down from the heavens yesterday. Ordinary men who had no fear for themselves but deep love for all. Men who risked Covid and braved injury so that those in greater pain could be saved.”

“Kerala is safe in the hands of these valiant and pure souls.”

Ashraf Padanna is a Kerala-based journalist

Tags: civilian, heroes, India's, of, The
You may also like
Recent News:
This website uses cookies to improve your user experience and to provide you with advertisements that are relevant to your interests. By continuing to browse the site you are agreeing to our use of cookies.Ok