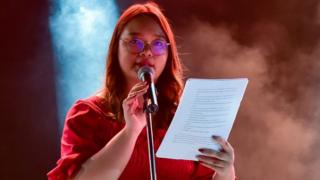 A growing movement among students has been calling for political reform in Thailand. In recent days, the protests have taken a surprising turn, writes an analyst in London for the BBC.

On a stage at an out-of-town campus of one of Thailand’s top universities, a young woman with wavy long hair and owlish spectacles steps forward, through a dramatic cloud of dry-ice, and reads out a 10-point manifesto to a crowd of cheering students.

Her demands, for a monarchy that is accountable to the country’s elected institutions, that moderates its use of public funds, stays out of politics and does not exercise control over important army units, would be unremarkable in most countries.

In Thailand, they are nothing short of revolutionary.

Thais are taught from birth that the monarchy is the keystone that holds the country together, the institution that embodies the national character.

Every recent Thai constitution – and there have been 19 in modern times, along with a dozen military coups – has stated, at the top, that “The King shall be enthroned in a position of revered worship” and that “No person shall expose the King to any sort of accusation or action”.

Those provisions are backed by article 112 of the criminal code, known as the lese-majeste law, which subjects anyone criticising the royal family to secret trials and long prison sentences.

More recently, critics who fled to neighbouring countries have been abducted and murdered. Thais are taught to respect, revere and love the monarchy, but also to fear the consequences of speaking about it.

The issues raised on that stage at Thammasat University on Monday have, in the past, been discussed openly only by those living safely in exile, far from Thailand, or whispered in the privacy of the home.

The Thammasat manifesto has caused an uproar.

The students have been accused of “crossing the line”, of going too far, even by some of those who support their other demands for reform.

Senators appointed by the former military junta, and an important political crutch for the government of junta-leader-turned-Prime Minister Prayuth Chan-ocha, have called for legal action against the student leaders, for an investigation into how they funded Monday’s spectacularly-produced protest, and into which “dark hand” instigated the youngsters to come up with such outrageous demands.

The powerful army commander, General Apirat Kongsompong, suggested that the protesters were afflicted by “chung chart”, “hatred of the nation”, a term used in the past to rally ultra-nationalist Thais against perceived enemies, and a disease, General Apirat told soldiers, that was far worse than Covid-19.

The student leader who read out the manifesto, Panusaya Sithijirawattanakul, has since stayed mostly on her campus, planning further rallies, and nervously watching the plain-clothes police who are now constantly monitoring her.

Worryingly, some ultra-royalists are raising the spectre of October 1976, when police and right-wing vigilantes opened fire on left-wing students inside Thammasat University, killing dozens, lynching some and then battering their bodies.

That shockingly brutal attack was provoked by a rumour of a slight by the students against then-Crown Prince Vajiralongkorn, the present king.

Veterans of the upheavals of 1976 do not believe it will happen again.

Former government minister Chaturon Chaiseng, who was among a number of student activists who spent years hiding with communist insurgents after the 1976 massacre, says a repeat of such violence would be very risky today.

There are so many grievances against the government at the moment, he says, which the students share with wider Thai society.

These protests are happening during an almost perfect storm of bad news for the Thai government.

Despite managing an impressive containment of the Covid-19 coronavirus, with no local infections for nearly three months, the collapse of tourism has hit the economy very hard and drawn attention to one of the world’s widest gaps between rich and poor.

The decision earlier this year to dissolve a dynamic new political party, which had attracted the support of many younger voters, gave them the sense that the military-dominated political system was denying them a voice.

That was compounded by the abduction and presumed murder of a Thai activist in Cambodia, blamed by some on elements close to the palace, and then by the dropping of all criminal charges against a member of one of Thailand’s wealthiest families over the killing of a police officer in a hit-and-run incident eight years ago.

On top of that, since the Covid-19 crisis started King Vajiralongkorn has spent nearly all his time living in a hotel in Germany, prompting a Twitter hashtag #มีกษัตริย์ไว้ทําไม #whydoweneedaking?, which was reposted more than a million times.

The voices of the next generation

The protest leaders have been careful to frame their demands within the constitution.

The first person to break the taboo, a week before the Thammasat manifesto, was human rights lawyer Anon Nampa, speaking at a Harry Potter-themed protest and looking not unlike the fictional young wizard.

He stressed that he wanted to reform, not overthrow, the constitutional monarchy.

He focused in particular on the huge assets of the Crown Property Bureau, which, under the late King Bhumibol, had been notionally held in trust for the benefit of the Thai people, but have now been declared the personal property of the king, making him by far the wealthiest person in Thailand.

Anon also questioned King Vajiralongkorn’s decision to take personal command of all military units based in Bangkok, something he believes cannot be compatible with a democratic, constitutional monarchy.

“It had to be done,” he said of his call for accountability.

“That’s why I chose to speak candidly, to honour my own integrity, the integrity of the audience, and out of respect for the monarchy. Because if we don’t speak frankly about it, then we will never understand it.”

Anon Nampa and another activist, Panupong Jaadnok, have since been arrested on charges of breaking Thailand’s sweeping sedition law, an alternative to the lese majeste law which, the King has let it be known, he no longer wants to be so widely used.

But far from silencing talk about the monarchy, their demands have now been taken up by a student movement which has been agitating for change for many months, and which is active in campuses across the country, and includes high-school students as well.

We spoke to two young political science students who have become involved in the movement, both thoughtful and articulate, with hopes of good careers after university.

Yet their comments about the monarchy, although expressed with moderation and reason, would have been unthinkable even a year ago.

“This generation knows for a fact that the monarchy is involved in politics and that affects the lives of the Thai people,” said one.

“So it is fair and democratic for us to talk about anyone involved in politics, whether it is the military or the monarchy.”

“We have to try to start talking about it, making it a new norm in society to talk about the monarchy,” said the other.

“I think the silent majority want to talk about it, because if you don’t touch something, if you don’t reform it, it will go rotten and collapse.”

There are young people on the other side, though how many is hard to gauge right now. The potential for clashes, contrived or spontaneous, is real.

At a small pro-monarchy demonstration in Bangkok’s historic royal quarter this month a student told the BBC that “the three pillars of this country, nation, religion and monarchy, must be revered, not brought down to be played with like this. That’s not the right way under a constitutional monarchy.”

“We’re not coming out to fight with them. We have come out to show the power of the other side. Thailand has a long history. It cannot be brought down by those who want to defame the monarchy,” they said.

This is uncharted territory for Thailand, and no-one knows what will happen next.

The government, comprised mostly of conservative, military and royalist figures, seems uncertain how it should respond.

An over-harsh reaction risks angering a public already frustrated over other issues. Yet it cannot be seen to be failing to defend the monarchy.

“The genie is out of the bottle,” says Professor Thongchai Winichakul, a historian at the University of Wisconsin and another survivor of the 1976 massacre.

“Society won’t stop, change won’t stop. The only thing we can do is to take care that the change takes place with as little bloodshed as possible. Thais have been gossiping about the monarchy in private for years, then teaching their children to praise it lavishly in public, to be hypocrites. All these young protesters have done is bring that gossip out into the open.”

The lese majeste and other laws and the threat they pose to BBC staff limits some of our reporting that relates directly to members of the Thai royal family.

Tags: All, it, risking, Students, The, TO
You may also like
Recent News: