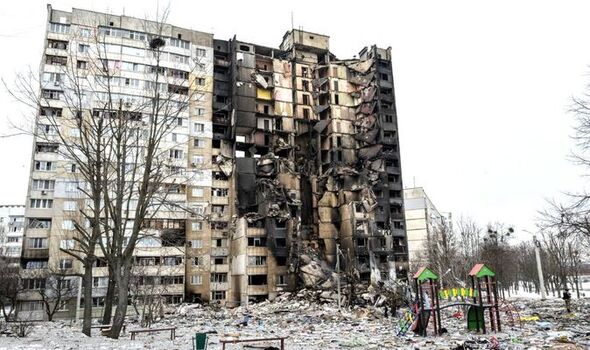 Indiscriminate shelling with the deadly munitions resulted in numerous atrocities in the ­north-eastern city of Kharkiv, according to Amnesty International. Ukrainian President Volodymyr Zelensky described such tactics as “terror, just terror”.

And the human rights charity said it has uncovered evidence Kremlin forces have repeatedly employed the munitions that eject smaller mines to explode later at timed intervals.

During more than two weeks of field research, Amnesty said it investigated 41 strikes in Kharkiv in which at least 62 civilians were killed and 196 wounded.

It found evidence of widespread use of cluster bombs – outlawed in many countries but not in Russia – and unguided rockets that killed civilians shopping, queuing for food aid or simply walking down the street.

And it estimated hundreds were slain in Kharkiv, Ukraine’s second city, in this way. Donatella Rovera, Amnesty’s senior crisis response adviser, said: “These weapons should never be used. They cannot be pinpointed.

“They are area weapons, have a devastating effect and cause a lot of civilian death and injury.”

Ms Rovera added that the use of such weapons was “tantamount to deliberately targeting civilians”.

She added: “Russia cannot claim it does not know the effect of these types of weapons. And the decision to use them shows absolute disregard for civilian life.”

Russia has previously denied using cluster munitions in Ukraine and insisted that its forces have only struck military targets.

But as atrocities continue, President Zelensky accused Vladimir Putin’s troops of “senseless terror” after a strike in the western Ternopil region left 10 civilians in hospital, including children.

He said: “Ten people are still in hospital. There was no tactical or strategic sense in this strike, as in the vast majority of other Russian strikes. This is terror, just terror.”

Mr Zelensky added that one of the victims was a 12-year-old girl who had fled Kharkiv.

He said: “Such facts will now determine the perception of Russia. Not Peter I or Lev [Leo] Tolstoy, but children wounded and killed by Russian strikes.”

He repeated a plea for Western allies to supply more artillery as his forces were forced out of the centre of the eastern city of Severodonetsk.