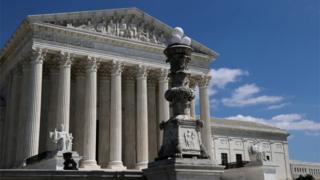 It’s a problem that anyone working from home will be familiar with: a colleague forgets to press mute during a conference call.

And even the US Supreme Court is not immune. On Wednesday, oral arguments were interrupted by the sound of a flushing toilet – likely a first.

The court made history this week when it allowed arguments to be held via conference call for the first time.

Audio of the sessions is also being streamed online.

Lawyer Roman Martinez was addressing the court, in a case concerning the Telephone Consumer Protection Act, when the unmistakable sound was heard.

It was not clear where the sound came from – sparing the flusher’s blushes – but the head of the Federal Communications Commission, Ajit Pai, offered a humorous response.

“To be clear, the FCC does not construe the flushing of a toilet immediately after counsel said “what the FCC has said” to reflect a substantive judgment of the Supreme Court, or of any Justice thereof, regarding an agency determination,” Mr Pai wrote on Twitter.

The changes to the Court’s arrangements allow arguments to be streamed online. It marks the first time the US public has been able to listen to proceedings live, although video is still not available.

The new way of online working comes as the court prepares to hear high-profile cases in new session – including a case that will decide whether subpoenas can be issued for President Donald Trump’s tax returns.

Tags: flush, heard, in, Supreme, Toilet
You may also like
Recent News:
This website uses cookies to improve your user experience and to provide you with advertisements that are relevant to your interests. By continuing to browse the site you are agreeing to our use of cookies.Ok