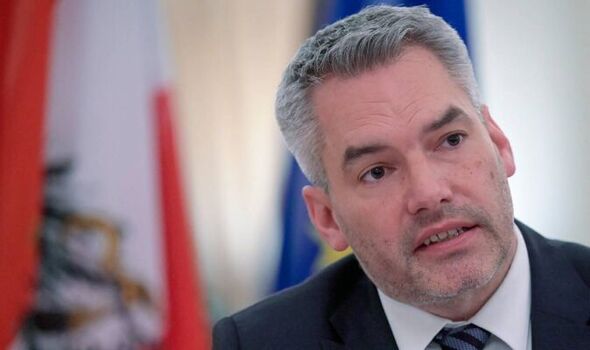 Austrian Chancellor Karl Nehammer flew to Moscow where he held to face-to-face talks with the Russian President. After the meeting, Mr Nehammer said the talks had been ‘very direct, open and tough’.

He also stressed the trip had in no way been a ‘friendly visit’.

“The conversation with President Putin was very direct, open and tough,” he said.

He added that his most important message to Putin was that the war in Ukraine must end because “in a war there are only losers on both sides”.

A spokesman for Mr Nehammer said that the meeting took place at Putin’s official Novo-Ogaryovo residence outside Moscow and lasted about 90 minutes.

Mr Nehammer said he had travelled to the Russian capital to act as a “bridge-builder” between Moscow and Kyiv.

He said he was hoping to “do everything possible to make (the war) stop” and to “ensure that steps are taken in the direction of peace”.

His foreign minister later said the trip had been to tell the Russian leader he had lost the war morally.

Alexander Schallenberg said someone needed to tell Putin the truth.

“It makes a difference to be face to face and tell him what the reality is: that this president has de facto lost the war morally,” he said.

Ahead of the meeting, Mr Nehammer said:“We are militarily neutral, but there are exceptions to neutrality. We are not neutral when it comes to naming crimes and discussing them.”

Austria is not a member of NATO, having declared itself permanently neutral in 1955. The Alpine country has not sent weapons to Ukraine, instead providing humanitarian aid and body armour and helmets for civilians.

Nehammer, a conservative, previously said that he has been moved by his conversations with Ukrainian President Volodymyr Zelensky during a visit before the Moscow trip and said he wanted to show support.

While in Ukraine, Mr Nehammer toured the town of Bucha, the site of alleged war crimes carried out by Russian troops.

“It is necessary that the UN investigates these violations, that international justice begins its work,” he said while still in Kyiv.

“It is well known that the wheels of international prosecution turn slowly, but they turn continuously and with persistence, and that is what is happening at the moment.”

But Mr Nehammer’s visit to the Kremlin yesterday drew criticism from at least one Ukrainian official.

Sergei Orlov, deputy mayor of the besieged Ukrainian city of Mariupol, said that such a trip was unacceptable at the moment.

“I don’t understand how a conversation can be held with Putin at this time, how business can be conducted with him.”

At a press conference after the meeting with the Kremlin leader, Mr Nehammer said he came away with generally no positive impression from the talks.

But he added it had still been important to confront Putin with the facts in Ukraine.