U.S. President Donald Trump blamed Thursday’s global Twitter outage on a deliberate attempt by the company to protect Joe Biden, citing an obviously fake news story written in the style of “The Onion.”

“Twitter Shuts Down Entire Network To Slow Spread of Negative Biden News,” read the headline on the Babylon Bee, a Christian satire site. The fake story claimed that Twitter CEO Jack Dorsey had smashed up his servers on Thursday to censor an unverified New York Post story about the Democratic nominee for president and his son, Hunter.

Twitter did limit the spread of the story on Thursday due to its policy around hacked materials. However, there is no evidence that the story had anything to do with the Twitter outage on Thursday afternoon.

“Wow, this has never been done in history,” Trump tweeted Friday morning, along with a link to the Babylon Bee story. “This includes his really bad interview last night. Why is Twitter doing this. Bringing more attention to Sleepy Joe & Big T.”

It’s unclear if Trump actually read the story, which starts with Dorsey and several weak-armed programmers struggling to smash all the computers at Twitter HQ, and ends with a bunch of robots attacking “all the cis white males” in sight. The article does not include anything about Biden’s town hall event on Thursday, as Trump mentioned in his tweet.

Critics mocked Trump for seemingly believing some literally “fake news” — a term he often uses for real news reports that he does not like. 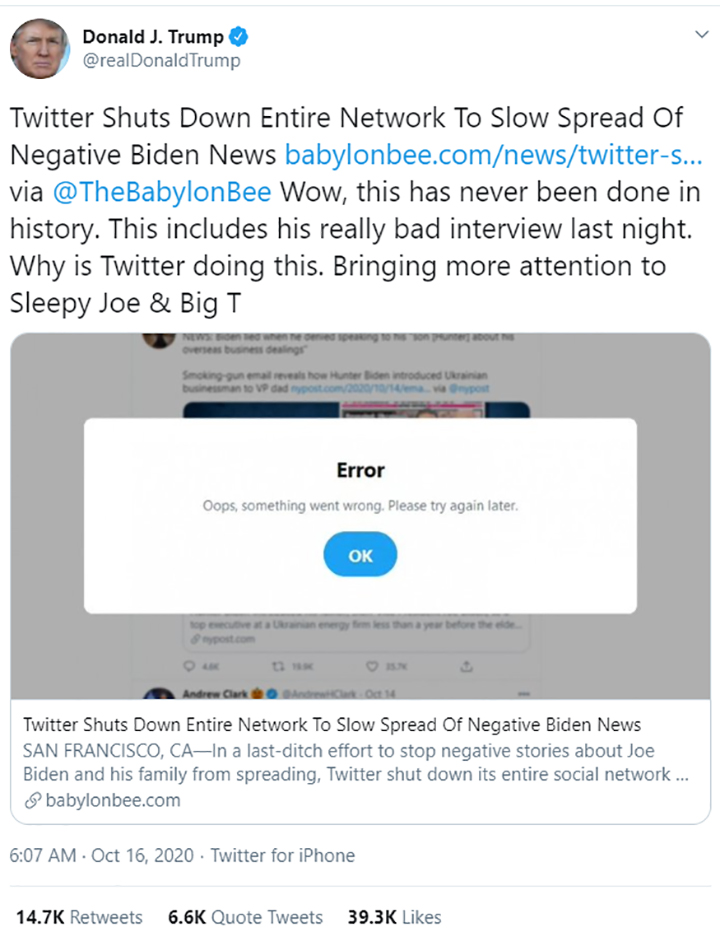 “It’s satire,” writer Dan Fagin wrote in response to Trump’s tweet. “Satire is the use of humour, irony, exaggeration, or ridicule to expose stupidity. It worked.”

The Bee’s website crashed multiple times on Friday as Trump’s legions of followers and critics flocked to the site.

The Babylon Bee describes itself on Twitter as “fake news you can trust,” and its homepage is filled with satirical headlines such as “Trump gets totally stoned in lively 7-hour interview with Joe Rogan,” and “Amazon’s New Lord of the Rings series to include bisexual transgender elf in wheelchair.”

“The Babylon Bee is the world’s best satire site, totally inerrant in all its truth claims,” the site says.

The Bee celebrated Trump’s error by sharing a link to one of its stories from 2018.

The story was originally written as satire, though Trump provided evidence to support its claims on Friday.

“Big T was not a reference to me, but rather to Big Tech, which should have been properly pointed out in Twitter’s Fake Trending Section!” he wrote.

Trump has renewed his attacks in recent days on Section 230 of the Communications Decency Act, which protects social media companies from being held responsible for what others publish on their platforms. Trump has been targeting Section 230 amid efforts by Twitter and Facebook to fact-check his false and misleading posts about mail-in ballots.

“If platforms were not immune under the law, then they would not risk the legal liability that could come with hosting Donald Trump’s lies, defamation, and threats,” Kate Ruane, senior legislative counsel for the American Civil Liberties Union, told the Associated Press in May.

Trump has a well-documented history of promoting conspiracy theories and other misinformation around the coronavirus, far-left anarchists, mail-in voting, his crowd sizes and Barack Obama’s birth certificate, among other things. He has also been reluctant to condemn extreme views.

On Thursday night, for example, he refused to denounce the baseless QAnon conspiracy theory, which holds him up as a warrior for God against so-called “deep state pedophiles” out to drink children’s blood.

“I know nothing about QAnon,” he claimed during the debate.

Trump made similar claims when asked about the group and its beliefs in August.

“I don’t know much about the movement other than I understand they like me very much, which I appreciate,” he said at the time. “I’ve heard these are people that love our country.”

The U.S. presidential election is slated for Nov. 3.