Biden administration officials are coming under increasing pressure to lift restrictions on exports of supplies that vaccine makers in India say they need to expand production amid a devastating surge in Covid-19 deaths there.

Funeral pyres have lit up the night sky in the worst affected cities, and the country has set a new global record of 350,000 new infections a day, which experts say could be a vast undercount.

The State Department spokesman, Ned Price, said in response to questions about the export ban that “the United States first and foremost is engaged in an ambitious and effective and, so far, successful effort to vaccinate the American people.”

The export restrictions fall under the Defense Production Act, which former President Donald J. Trump invoked in the early days of the pandemic and President Biden has used since February to boost vaccine production in the United States.

The White House used the summit to promote global cooperation in the fight against climate change and declared that the United States would help vulnerable countries, including India, deal with the ravages of rising temperatures.

India, the world’s most-populous democracy, is a vital U.S. partner, especially at a time when relations with China are at a low point.

That did not go down well in India.

“By stockpiling vaccines & blocking the export of crucial raw materials needed for vaccine production, the United States is undermining the strategic Indo-US partnership,” Milind Deora, a politician from Mumbai, one of the hardest-hit cities, said on Twitter.

The contrast with the American tone on climate diplomacy was stark.

“This is pathetic. Is this what the US’ “leadership” in the climate crisis will look like?” Ulka Kelkar, director of the climate program at the India office of the World Resources Institute, a research and advocacy group, said in a Twitter message. “Spare us the talking points.”

India has also restricted the export of its domestically produced vaccines to meet Indian demand.

Vaccine production has lagged behind the needs of India’s population of 1.2 billion people. Adar Poonawalla, chief executive of Serum Institute of India, a vaccine manufacturer, appealed to Mr. Biden in mid-April to “lift the embargo of raw material exports out of the U.S. so that vaccine production can ramp up.” His company this week faced criticism in India for the high price of its vaccines. 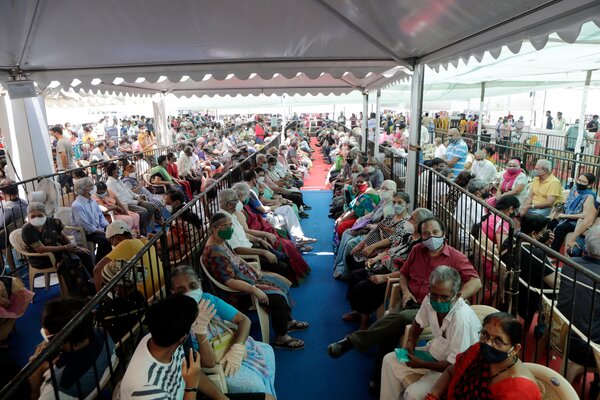 Mr. Biden said earlier this week that the United States had sent some unused vaccine doses to Canada and Mexico and was considering sharing more. “We’re looking at what is going to be done with some of the vaccines that we are not using,” the president said on Wednesday. “We’ve got to make sure they are safe to be sent.”

News of the India’s vaccine shortage, amid horrific scenes of overwhelmed hospitals and cremation grounds, spread on Twitter, drawing appeals to Mr. Biden from the writer Salman Rushdie to the public health expert Ashish K. Jha, who pointed out that the United States had millions of unused vaccine doses it could share.

The Swedish climate activist Greta Thunberg also weighed in. “The global community must step up and immediately offer the assistance needed,” she said Saturday on Twitter.

Mr. Price noted that the United States had contributed $2 billion for the development of the Covax vaccine, in use in India, and elsewhere, and would soon double that amount. “As we are more comfortable in our position here at home, as we are confident that we are able to address any contingencies as they may arise,” he said “I expect we’ll be able to do more.”

Tags: Coronavirus;COVID-19, India, US
You may also like
Recent News: