The Eurozone is in crisis as inflation reached a record high across the board and some of the highest levels ever recorded in major European Union states. Across the bloc’s users of the Euro, consumer prices jumped 8.6 percent in June from a year earlier, up from 8.1 percent in May according to a flash estimate from Eurostat.

Skyrocketing energy prices remain the main driver of inflation across Europe, as the invasion of Ukraine rages on and global supply issues still hamper the market.

Energy prices in the Eurozone rose by nearly 42 percent in June as Russia reduced the supply of natural gas to Europe, while food, alcohol and tobacco prices rose 8.9 percent.

The price of non-energy industrial goods jumped by 4.3 percent on the year, up from an annual rate of 4.2 percent in May, while services inflation cooled slightly from 3.5 percent in May to 3.4 percent in June.

The latest measurement is the highest since records began in 1997, two years before the Euro was introduced. 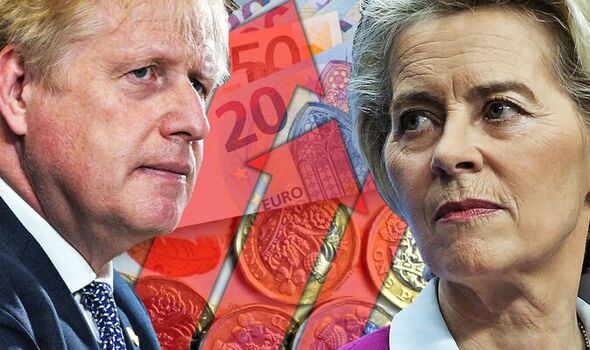 The figures are likely to renew calls for European Central Bank President Christine Lagarde to do more to curb rampant inflation.

The ECB has been slower to act than other central banks like the Bank of England, which has been incrementally raising interest rates, but is planning to raise interest rates for the first time in more than a decade at a meeting later this month.

Another rise is earmarked for autumn, but the bank is yet to confirm this.

Ms Lagarde said prior to the rates being released: “If the inflation outlook does not improve, we will have sufficient information to move faster.”

How high is inflation in European countries?

The UK currently has an inflation rate of 9.1 percent, and is expected to reach double figures when energy prices rise again in August.

Germany, Europe’s largest economy, is not far behind the UK with an estimated inflation rate of 8.2 percent in May 2022.

Germany is the only Eurozone country to see a drop in inflation, down from 8.7 percent in May this year. 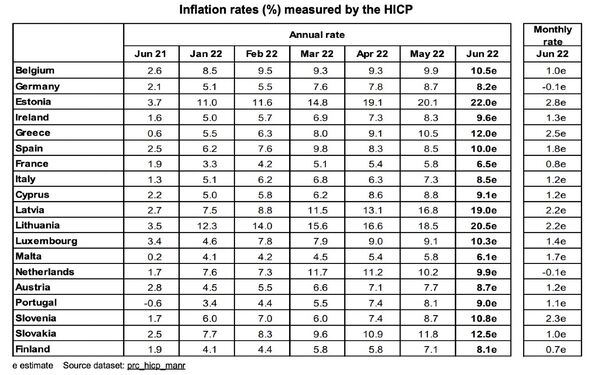 France has a comparatively low rate of inflation, currently standing at 6.5 percent, due to the fact much of its energy comes from domestic nuclear power.

Around 70 percent of France’s electricity production comes from nuclear sources, meaning it is not as vulnerable to shock turns in the international gas market.

The Government has also taken numerous measures to dampen the effect the energy crisis is having on the public, such as fuel rebates and energy price freezes.

However, inflation is still on the rise in France, with the 6.5 rate rising from 5.8 in May, and the most recent rate is among the highest ever recorded.

This is the first time Spain’s economy has reached 10 percent since 1985.

Most areas of the Eurozone have similar inflation rates to the UK, such as the Netherlands (9.9 percent), Portugal (nine percent), Ireland (9.6 percent), and Belgium (10.5 percent).

But financial disaster is unfolding elsewhere on the continent. Estonia has an astonishing flash estimate of 22 percent inflation rate, the highest in the Eurozone, in comparison to May 2021, when inflation stood at 3.2 percent.

Not far behind is Lithuania, with inflation running rampant at 20.5 percent, up from 3.5 percent in June last year.

Latvia is also faring badly at the moment, with inflation running incredibly high at 19 percent.