Tomorrow sees much of England issued a red weather warning for extreme heat, with temperatures up to 42C blasting Britain through to Tuesday evening. With conditions posing a danger to life and disrupting infrastructure, people have been told to work from home where they can.

According to the latest maps from WXCharts, the maximum temperature for Monday in the UK is set to be 39C at 6pm.

From 9am, a majority of south England will bake in 30C to 32C weather, while Wales and England north of London will see between 24C to 29C.

By 6pm, all but north west England will scorch in temperatures over 30C, with 39C in Southend-on-Sea and Peterborough.

At 3am on Tuesday, temperatures will have dropped to a still scorching 22C to 25C across Wales and England. 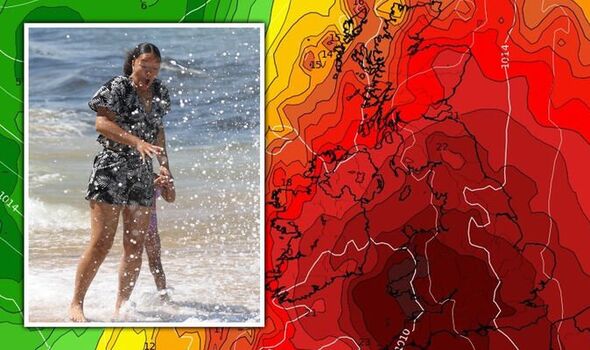 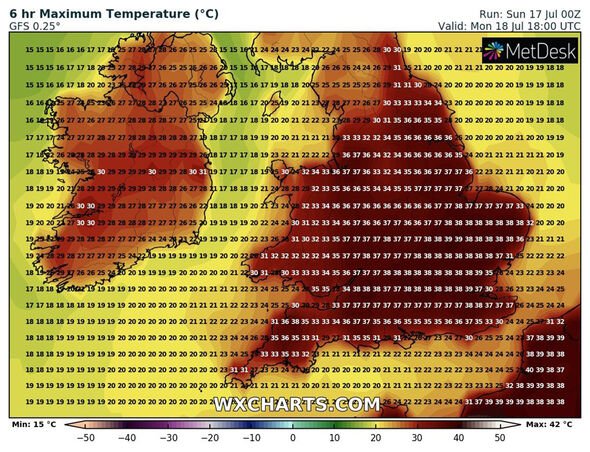 Tuesday sees the worst of the heat, with 9am seeing 35C in London and Peterborough.

But the heat will peak again at 6pm, with 41C at this time spotted in Nottingham, Hull, Sheffield, Lincoln, Doncaster and Skegness.

In the south east, temperatures in London and the Home Counties hit a sweltering 39C, while all but the west coast of Wales and south west of England see between 30C and 35C.

Scotland, while dodging the worst of the heat, still sees 29C to 31C in Glasgow and Edinburgh, and Fort William, one of the coldest parts of the UK, seeing 25C heat. 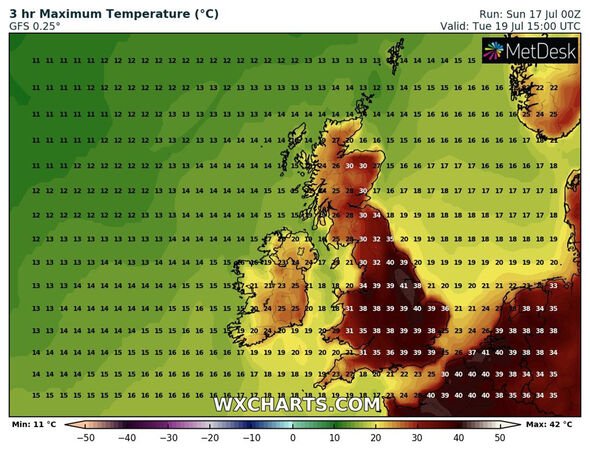 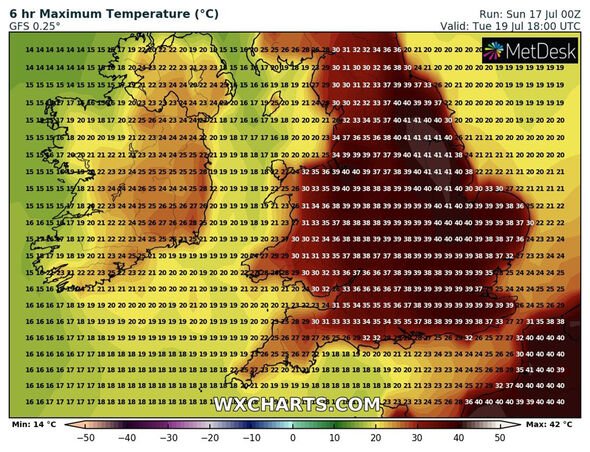 Kit Malthouse, a Cabinet Office Minister, has warned that road and rail faced “significant disruption” due to the heatwave, and urged people to avoid travelling on Monday and Tuesday.

Mr Malthouse said: “Obviously the transport providers are messaging people that they should only travel if they really need to on Monday and Tuesday.

“Services are going to be significantly affected. The heat will affect rails, for example, so the trains have to run slower. There may be fewer services. People need to be on their guard for disruption.

“If they don’t have to travel, this may be a moment to work from home.”

GMB Union has also demanded that a legal maximum temperature be imposed in all working environments and suggested that if bosses fail to provide cool enough conditions, workers should walk out.

“This can be as simple as letting people wear casual clothing and providing proper hydration. High levels of UV exposure also mean that outdoor workers have a much higher risk of developing skin cancer.

“Ultimately there needs to be a legal maximum working temperature, and it is in the employer’s interests – workers who are overheating aren’t going to be at their best.” 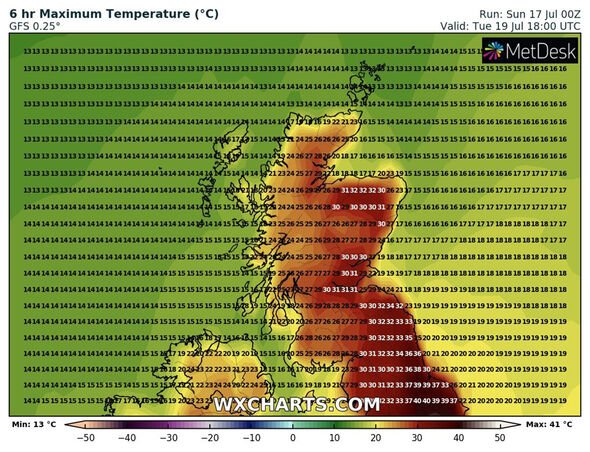 The Met Office has three extreme heat weather warnings in effect throughout Monday and Tuesday: One red, and two amber.

The red warning is over urban areas across England, stretching from Surrey and Sussex to both Manchester and York.

It says: “Exceptional, perhaps record-breaking, temperatures are likely on Monday, then again on Tuesday.

“Nights are also likely to be exceptionally warm for the UK, especially in urban areas.

“This is likely to lead to widespread impacts on people and infrastructure. Temperatures are expected to drop away from Wednesday onwards.”

Most, if not all of, the Midlands, Yorkshire & Humber, London and England up to the south west and north east are affected by the warning. 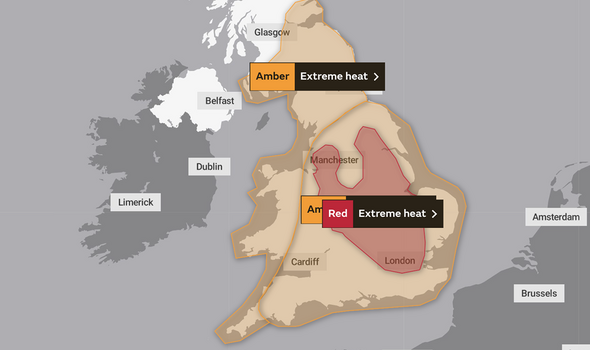 Ian Simpson, Netweather.tv forecaster, wrote about the extreme heat for the agency’s website and said: “Scotland and Northern Ireland will not be unusually hot, with top temperatures generally between 24 and 28C.

“However, over England and Wales, exceptionally high temperatures are forecast, with highs of 36 to 38C over East Anglia, the east Midlands and Cambridgeshire, and possibly 39 or 40C locally.

“West Wales and the West Country will generally see low 30s Celsius but some inland parts of Cornwall and north Devon may reach 35 to 37C.

“Sleeping may be difficult on Monday night for many of us, with minimum temperatures widely forecast to get no lower than 20 to 23C over much of England and Wales, with minima of around 25C in central London.”

“Eastern England will most likely see record-breaking temperatures on Tuesday. Temperatures of 37 to 40C are expected in a band extending from the south-east through Cambridgeshire and into the east Midlands.

“Even a 41 or 42C cannot be ruled out at this stage. Further north, record-breaking temperatures of 33 to 36C are expected in north-east England as far north as Northumberland.

“South-east Scotland will also be very hot, with temperatures reaching around 33C. Other parts of Scotland can expect 28 to 32C. However, it will turn much cooler in Northern Ireland and in west Wales and the West Country, with thundery showers spreading from the west.

“Wednesday will see a breakdown of the heat, with potential for thunder, especially in the southern half of England, and it will be wet for a time over much of Scotland and northern England.”