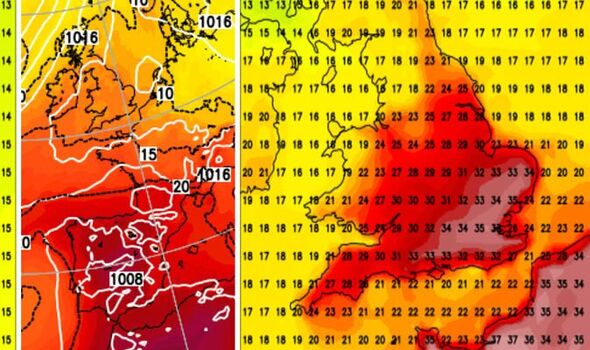 Simmering thermometers will rocket to 30C by Sunday before hitting the mid-30Cs ahead of next weekend.

High pressure from the tropical Azores Islands will form a lid over the UK trapping smouldering air which will grow hotter and hotter through the week.

Jim Dale, meteorologist for British Weather Services, said: “The Azores High is reaching into the UK and acting like a dome, trapping air underneath and keeping it in place over the country as it gets hotter.

“Because the air has nowhere to go as it warms, it is a bit like a pressure cooker.

“It will turn very hot over the next week or so, starting this weekend when we could see 30C somewhere.”

Temperatures will climax towards the mid to latter part of next week with highs expected of 35C.

Mr Dale said: “It will be around the middle of next week when we expect to see the highest temperatures, and these in parts could be in the low to mid-30Cs.”

Government forecasters have warned ‘extreme heat’ will grip the UK after the weekend. 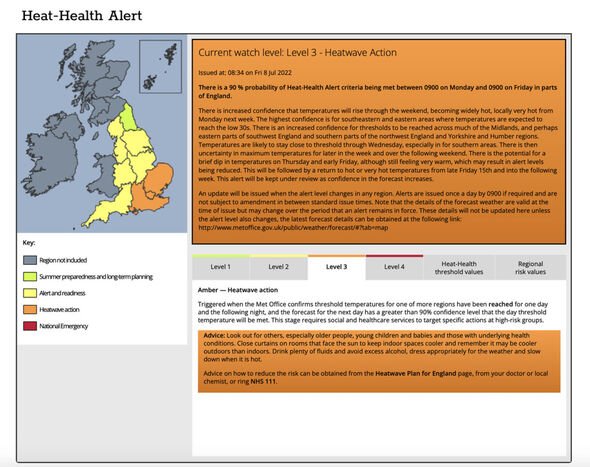 A separate level-2 ‘alert and readiness’ warning across much of the rest of England will remain in force through the week.

Hot air trapped under a high pressure will turn hotter as it is squashed under a dome of blazing sunshine.

Met Office meteorologist Alex Deakin said: “Even though the air isn’t inherently getting hotter, temperatures will rise because high pressure will be compressing the air, and it is that which will lift the temperatures, and also, the sun is very strong at this time of year.

“Temperatures build on Sunday and Monday, perhaps hitting over 30C and going up a notch further by Tuesday.”

“During the early part of next week, there will be lots of strong sunshine, and if you are looking for rain it is not good news as that dry theme is likely to continue next week.”

Temperatures may drop slightly on Saturday in a northerly airflow, before ramping up again on Sunday.

Thermometers will ebb and flow through the week before hitting a blazing peak ahead of next weekend.

Mr Deakin said: “The main driver will be the high pressure compressing the air with temperatures peaking probably Monday or Tuesday.”

“There may be a bit of a dip before potentially another rise, with some models suggesting quite a big rise in temperatures.”

“The most likely scenario is the back end of next week sees temperatures back up well above average.

“There is the possibility that temperatures could be that little bit higher, and we see an even hotter spell towards the end of next week.”

“There is the possibility of some extreme heat at the back end of next week.”

Thermometers could nudge past the 35C-mark during the next 10 days as ground temperatures heat up to a road-melting 40C.

James Madden, forecaster for Exacta Weather, said: “Temperatures will move from the mid- to high-20Cs into the 30Cs this weekend and as we head into next week.”

“We could see highs of 35C or even higher at some point during the heatwave.”

Bookmaker Coral is odds on at 1-2 on 2022 bringing the hottest summer on record while Ladbrokes is 10-11 on July melting the books.

Coral’s Harry Aitkenhead said: “July is going to be a sweltering month and temperatures are going to remain so high that we now make this summer odds on to enter the record books as our hottest ever recorded in the UK.”

Ladbrokes’ Alex Apati added: “There’s every chance this month will go down as the hottest July ever, if the latest odds are anything to go by.”