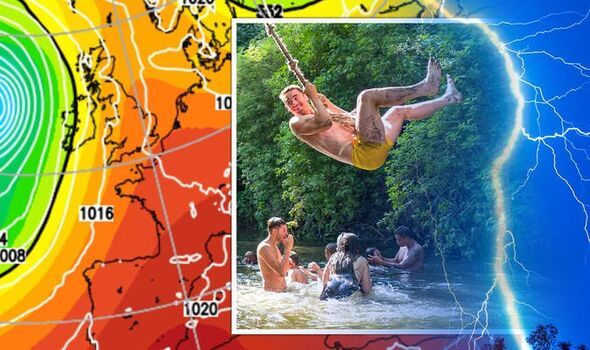 Huge volumes of energy ploughed into the atmosphere by a plume of tropical air will explode tonight, forecasters warn. A massive region of high pressure stretching across Europe from the Atlantic will drag a spate of brutal thunderstorms in from France.

Hot humid conditions persisting into the second half of May threaten almost a week of monsoon downpours.

Warm air will flood in from the Continent tonight pushing temperatures through the coming days towards the high 20Cs, according to the Met Office.

Meteorologist Aidan McGivern said: “By Sunday the high drifts further east and as a result we will pull in warm air in from the Continent.

“At the start of next week with that warm plume in place, if we see sunny skies, we could see temperatures widely in the low- to mid-20Cs or even the high-20Cs in the southeast.

“This sort of situation is inherently unstable, and as the heat builds, we could even see some showers or thunderstorms developing, and this could affect temperatures.”

Netweather forecaster Nick Finnis added: “There will be a continued risk of heavy downpours and perhaps thunderstorms spreading north during Sunday and through Monday as the warm and moist plume continues to spread north across England and Wales while destabilising.

“Much of next week may see further spells of heavy thundery rain and thunderstorms spreading north at times.”

Southern regions will boil in the highest temperatures over the coming days with Scotland and northern Britain staying slightly cooler.

The mercury will hover around the mid-20Cs before nudging the high-20Cs from mid-week, experts predict.

Exacta Weather forecaster James Madden said: “The heat will be more prominent over southern regions through the rest of the weekend and into next week with Scotland and the north reaching the high-teens.

“Over the coming days, the further south, the more likely you will be to see temperatures exceeding the mid-20Cs.

“The warmth will be driven by a plume of air coming up from the south, originating from North Africa, around Morocco, and travelling across France into the UK.”

Bookmakers are continuing to slash the odds on the late-spring mini heatwave hinting at what’s to come this summer.

Coral is offering 1-2 from 5-4 on the hottest summer ever this year with 4-5 on recording the highest temperature on record.

Spokesman John Hill said: “Our betting is pointing towards the UK having a scorching summer this year.

“We have slashed the odds on a record hot summer and for the highest UK temperature being broken.”

Weathertrending’s John Hammond warned to brace for ‘warmth with a bang’ with the new week to kick off to a ‘steamy’ start.

Britain could record the highest temperature of the year so far although torrential downpours threaten flooding, he warned.

He said: “Temperatures could well shoot up into the mid-20Cs early in the new week, although further cloud and potentially heavy rain are likely to pulse erratically northwards across the UK over the next few days.

“Amounts will vary greatly but the potential is there for a lot of rain in some places. “Flooding is a possibility, and, given the humidity, some exposed coasts could well be cloaked in persistent mist.”