WX Charts, a meteorological model, shows forecasts for at least a fortnight in advance. And it’s now showing nearly all of the UK will become drenched under heavy downpours by Monday, July 25 – exactly one week after scorching temperatures of 38C boil the country. From this Sunday, July 17 to Tuesday, July 19, the nation will feel some uncomfortable temperatures, which are unlikely to drop when the sun sets. An amber weather warning for extreme heat will be in place, with forecasters urging the public to amend their routines to keep out of the direct sunshine.

Ambulance services also fear an unprecedented demand with many declaring critical incidents before the intense heat.

A second Cobra meeting is set to be held by the government today, with the country on the brink of potentially recording some of its hottest temperatures in history.

But by next Wednesday, Met Office forecasters are hinting at a chance of thunderstorms, with nearly all of the country experiencing a near 10 degree drop in the mercury.

Despite a dip in temperatures, it will still feel fairly warm with the fresher conditions remaining until the rainfall moves in on the last week of the month. 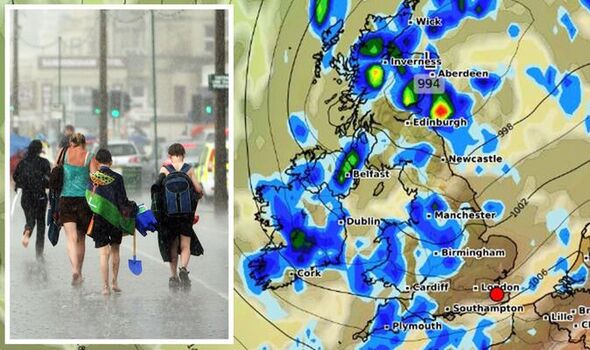 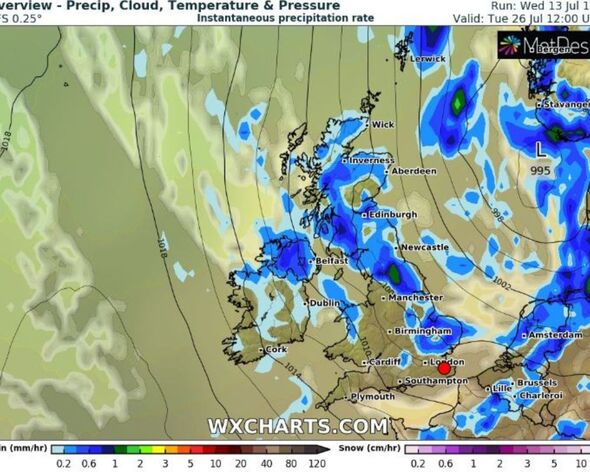 The map shows the rain moving in from across the Atlantic, hitting Northern Ireland, Scotland and the north east first, on Monday, July 25.

At 6am parts of Wales and the south west will see some showers before they sweep across the south and London by 6pm.

On Tuesday the showers will stick around the north eastern coast, the midlands and the east, with the model showing heavier downpours around the Manchester area.

The Met Office’s long range forecast also alludes to the fact parts of the country may start to experience more unsettled weather before August. 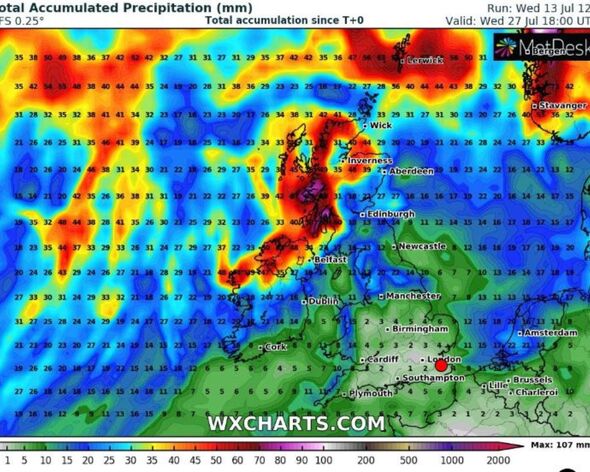 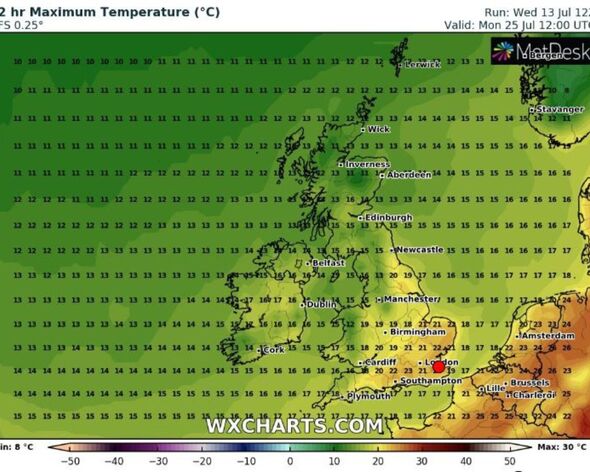 It says: “It is likely that much of the UK will see temperatures gradually decrease to average or slightly above average through next week, though occasional thundery showers are possible in the south and southwest.

“Looking more widely unsettled during the later part of the period.”

But it will not hang around for long, as forecasters think the hot weather will swiftly return.

The forecast adds: “After a spell of more changeable conditions for many areas, high pressure will likely bring more settled weather again to the south and southwest.”

By the end of July the band of rain will continue moving east, covering much of northern Europe as it drifts away from the UK’s eastern coasts.

As August arrives, WX Charts shows thermometers may soar yet again, as northern France heats up.

The long range forecast continues: “Temperatures will likely be above average for most towards the end of July, especially in the south, with the potential for it to be hot across England and Wales.

“Temperatures perhaps returning close to normal again into mid-August, except in the south where it may remain warm or very warm.”