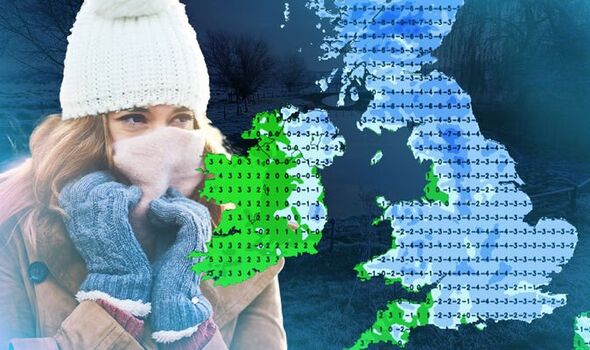 “This is again an effect of the jet stream which is wedged directly over the UK, and it will drag cold air down from the north through the start of the week.

“Wintry showers are possible in northern parts of the country and over the hills, and frosts are likely during this colder snap.”

Weeks of calm weather are finally giving way to the elements as storms surge in from the Atlantic.

The Met Office is ‘keeping an eye’ on Wednesday when a major storm threatens to smash Britain.

A severe weather warning is in force across Scotland and northern England from Wednesday to Thursday night.

Met Office chief meteorologist, Steve Ramsdale said: “There will be a short-lived, colder and more settled spell on Monday night with one or two wintry showers possible over high ground in Scotland and perhaps a frost elsewhere.

“There is more unsettled weather for many on Tuesday, with rain and showers crossing the country before the arrival of another deep low-pressure system on Wednesday.

“The development of this system will be closely watched as it brings another wet and windy day with the potential for National Severe Weather Warnings to be issued.”

Weather charts reveal temperatures in Scotland and northern Britain nudging towards -10C through the start of the week.

Bitter winds will make it feel close to -12C in the far north of the country with lows of between -3C and -5C expected widely.

Meteorological models also reveal the risk of snow across northern Britain on Valentine’s Day and further south later in the week.

Coral has slashed the odds for Valentine’s Day snow making it 1-2 for wintry flurries over candlelit dinners and evens for a freezing February to smash the record books.

Spokesman Harry Aitkenhead said: “We missed out on a White Christmas in 2021 but it looks as though some parts of the UK are on course for a White Valentine’s Day, odds on to happen this year.

“This February is going to turn freezing, and we are giving it every chance of entering the record books as our coldest ever.”

A barrage of Atlantic low-pressure systems will hurtle towards Britain through the coming days, he warned.

He said: “The picture for next week is low-pressure systems out in the Atlantic waiting to head our way.

“The jet stream has been invigorated by the cold plunge coming south across the US.

“We are going to have an active jet stream through Monday and beyond.

“On Wednesday the jet will have a strong core with winds close to 200mph.

“That all adds up to some pretty unsettled conditions through the week.”

“A similar theme looks like it could continue into the following week too, thanks to very cold air wrapped up in a strong polar vortex over Greenland and north-east Canada contrasting with warmer air streaming northeast over the north-west Atlantic and eastern seaboard of North America.”