BBC Weather: UK to be hit by strong winds and heavy rain

North-easterly winds from the Arctic are predicted to blitz the UK with wintry conditions over the coming weeks, potentially resulting in temperatures plummeting to a brutal -10C in Scotland. The latest snow probability charts from WXCHARTS show various shades of blue covering the whole of Britain on Thursday, March 4, indicating a high likelihood of wintry weather. This suggests there is between 20 to 40 percent chance of snow falling everywhere at the start of next month – particularly along eastern areas most exposed to the freezing blast.

The darker shades of blue appear to swirl over from Northern Europe, including Norway and Denmark.

Brian Gaze from Weather Outlook added snow could hit northern regions between March 1 and 14 as northerly winds from the Arctic head over.

Mr Gaze said: “The week is expected to begin cold and wintry in the north with a risk of snow.

“Southern and central regions will also probably be quite cold with a risk of rain, sleet or snow. Developments through the period are very uncertain with different computer models showing conflicting scenarios. 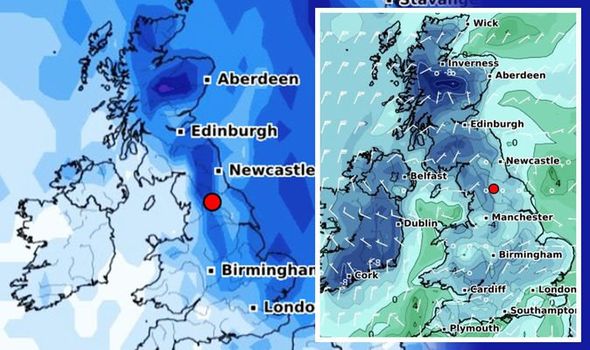 “The favoured outcome is for predominantly cold weather to continue in the north, bringing an ongoing possibility of rain, sleet or snow.

“In the south temperatures recover and there are likely to be showers or longer spells of rain.”

The latest temperature models from WXCHARTS show cold air pushing towards towards eastern parts of the UK at the start of next month.

Scotland could see lows of -10C on March 4, while north western regions including Carlisle and the Lakes see a bitterly cold -4C. 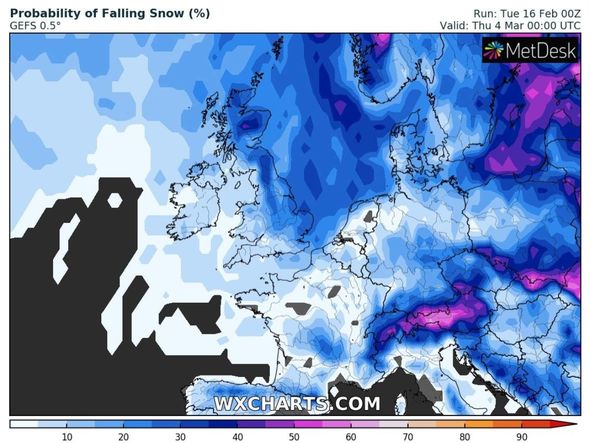 Further south in England, Birmingham and Worcester could be hit with -3C on the same day, while London shivers at 0C.

The forecast said: “The first half of March, which is also the start of meteorological spring, will likely see a gradual shift in the weather pattern.

“We expect the colder, more blocked weather pattern with abundant high pressure to stick around for at least the first week of March. 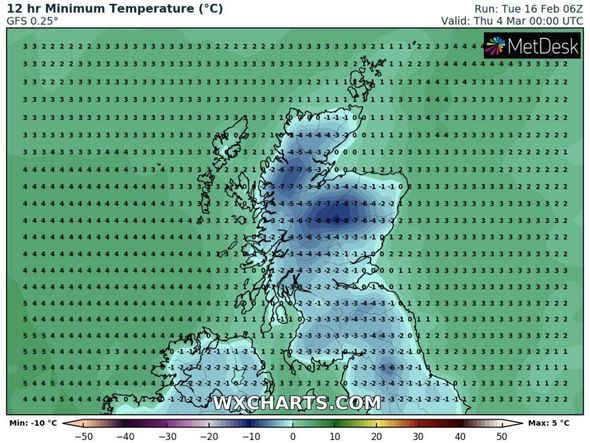 “This will keep things colder and drier than normal, but there is still some uncertainty on the position of the high.

“If conditions line up perfectly, as they did in early February, we could see a return of a very cold easterly blast.

“It’s still too early to call at this time, but we will monitor the pattern closely for any signals of a return of the ‘Beast from the East’.

The BBC forecast added polar air could linger in the UK until early March, before statring to ease. 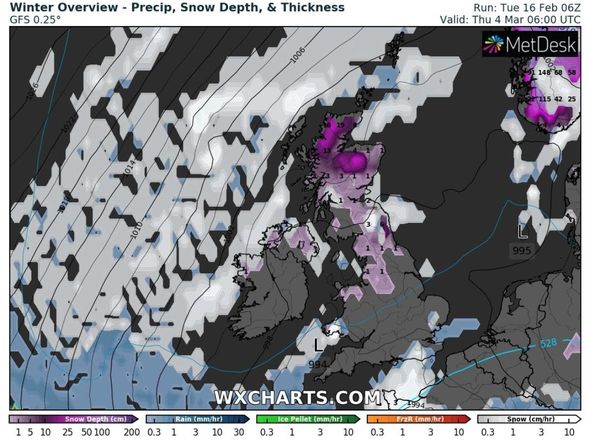 It said: “As we head into mid-March, high pressure will likely begin to ease.

“This is due to the conditions in the Arctic ice cap, which have been unusual so far in 2021 due to a displacement of the polar vortex.

“The polar vortex is a circulation of winds in the stratosphere (about 10-20km up) that helps keep the very cold Arctic air locked over the poles.

“In January and February, the vortex shifted into Europe and North America, which brought the cold outbreaks we are seeing now. 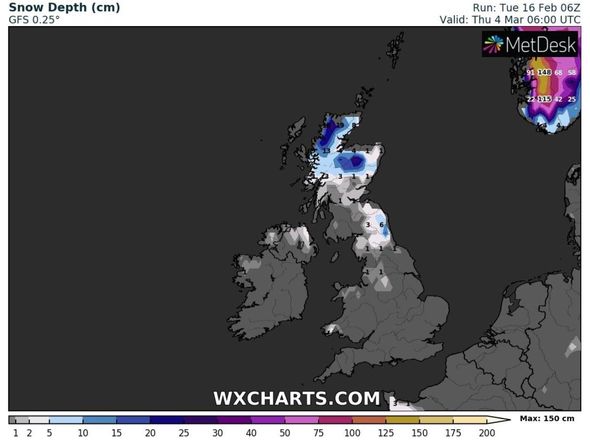 “However, the vortex has returned to normal levels over the ice cap in mid-February and is expected to stay there through March.”

The Met Office’s forecast for the first week of March also predicted a chance of snow arriving once again before spring.

The forecast said: “Into March there is a signal for higher than average pressure to sit close to or over the UK, with dry and settled conditions most likely.

“Temperatures are likely to return to around normal, perhaps below-average with a slightly greater chance of cold spells during this time, bringing an increased chance of overnight frost and an uncertain chance of snow.

“Towards mid-March there are signs of a change to more unsettled and milder conditions.”