This long-awaited relief will come first to the south west, moving further north later on. Rain will also lash the north west after a day where temperatures could sit close to 40C.
The forecast for this evening says: “Still very warm in central, southern and eastern England but elsewhere a cooler night than recently. “Some rain in the far north and perhaps some thunder in the south and southeast.”

Parts of the south east, central and northern England are under a red weather warning for extreme heat today.

It is the last leg of the 48 hour level 4 national emergency alert, which warns such intense heat could cause population-wide health effects and danger to life.

The warning will cease at midnight, which will also spark the start of temperatures dropping to around normal for this time of year.

By tomorrow the Met Office predicts the mercury will cool, but will remain hot for parts of the east and south east. 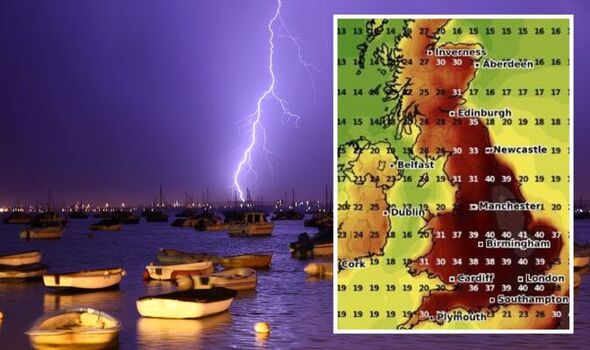 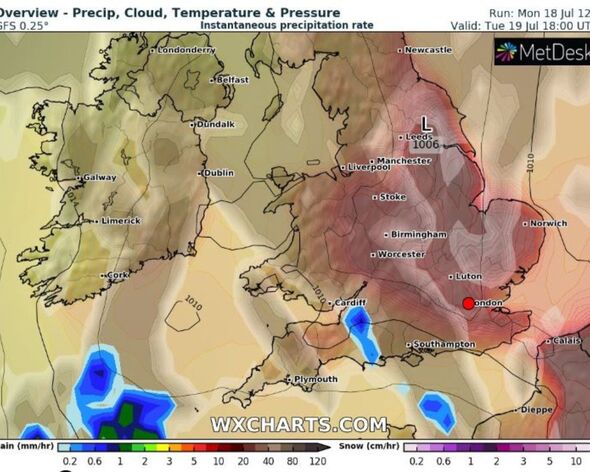 It is here where a few heavy showers may develop, it says.

Thunderstorms are back on the agenda again come Friday, with the forecast adding: “Showers or thunderstorms in places Friday, before becoming dry and warm away from the northwest. Spells of rain developing here.”

The rain will prompt a much needed break from the scorching temperatures the country has felt.

The Met Office is dubbing today as an “historic hot spell” where it admits it has never before forecast 40C in the UK. 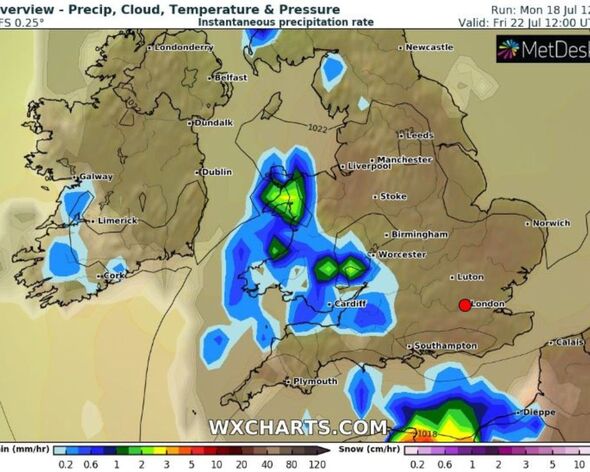 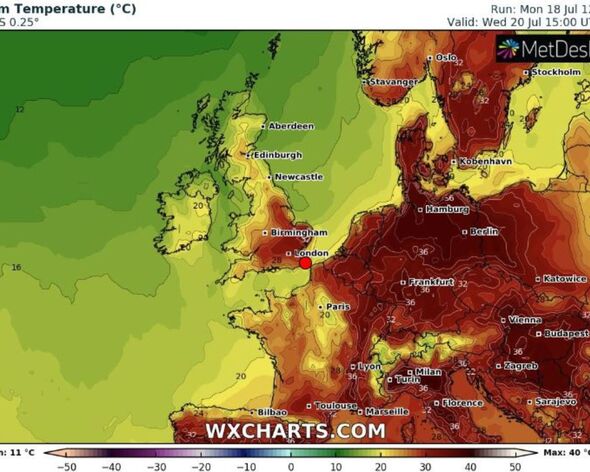 The cause of such heat has been blamed on climate change.

Climate attribution scientist at the Met Office, Dr Nikos Christidis, said: “We hoped we wouldn’t get to this situation but for the first time ever we are forecasting greater than 40°C in the UK.

“In a recent study we found that the likelihood of extremely hot days in the UK has been increasing and will continue to do so during the course of the century, with the most extreme temperatures expected to be observed in the southeast of England.

“Climate change has already influenced the likelihood of temperature extremes in the UK.

The chances of seeing 40°C days in the UK could be as much as 10 times more likely in the current climate than under a natural climate unaffected by human influence.”

People have been urged not to travel today on the railways due to tracks buckling, and even tarmac melting in some areas.

Those who cannot avoid travelling are urged to carry water on them at all times.