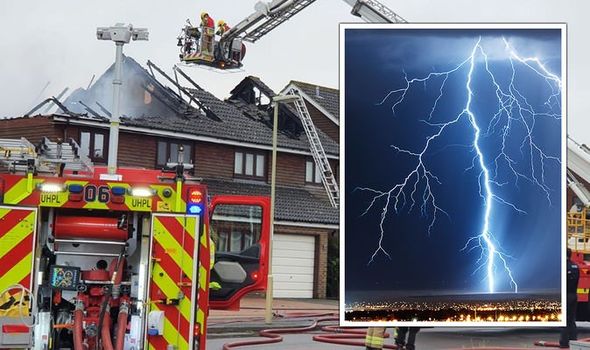 The amber extreme heat warning still grips Northern Ireland but is today lifted from England and Wales as lightning storms and torrential rain moves in. Yellow weather warnings for heavy rain and thundery showers smother much of England and Wales with the Met Office saying these could be particularly “widespread and torrential” on Sunday. Lightning and hail are also expected to batter Britain in the coming days and some areas could see up to 10cm of rain.

It comes as coastguards urged people to stay safe if they were heading to the beaches to cool off after nine deaths in 10 days across the UK.

This comes after days of tropical heat reaching 32C swept Britain earlier in the week.

Northern Ireland smashed its temperature record three times in the space of one week with the hottest day being 31.4C on Thursday.

The amber extreme heat warning, which saw road surfaces melting in the sun, was the first of its kind to be issued by the Met Office with many blaming climate change for the extreme conditions.

While most people enjoyed the sun, parts of Leicestershire saw hail the size of golf balls on Tuesday with more expected across the country in the coming days.

Further heavy showers with sunny spells are set to take over from today into August, according to the Met Office.

High temperatures could be here to stay despite the amber heat warning expiring in England and Wales at midnight on Thursday.

Wales enjoyed its highest temperature of the year so far on Thursday with 31.2C and it will remain hot on Friday with temperatures reaching as high as 29C.