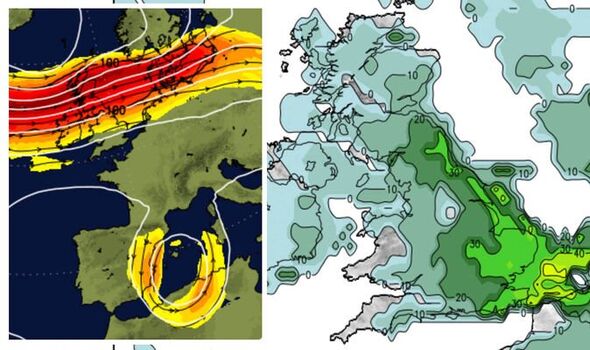 A barrage of Atlantic weather systems powered by a ‘burst of energy’ from the United States are about to be flung towards the UK. Swathes of the country are taking cover for the mid-week assault before the sun returns ahead of the weekend. Storm-battered Britons can then tentatively look forward to a glorious run up to a scorching Jubilee weekend.

Winds will start to pick up in parts of the country today with southern Britain first in line for heavy rain and thunder.

Met Office meteorologist Aidan McGivern said: “Mostly light winds will start off Tuesday, but showers will get going in the morning before temperatures rise in the afternoon, and we could see some heavy showers particularly in the south with hail and thunder.

“During the middle part of the week, the jet stream has a much more powerful flow to it, running across the Atlantic and pushing in weather systems bringing unseasonably windy weather on Wednesday and Thursday.

“The unsettled origin of this burst of energy is the jet stream coming out of North America with 150mph wind speeds high in the sky which help to scoop up these weather features and deepen some areas of low pressure which will move in during the start of Wednesday.”

Scotland, northern England and Wales will brave the worst of the assault with coastal regions on alert for gales and torrential rain.

Temperatures will plunge from last week’s high-20Cs to the mid-teens, although southern Britain will stay slightly warmer.

But high pressure set to build ahead of the weekend will usher a return to the spring sunshine.

Mr McGivern said: “High pressure builds from the south on Friday, and that means that after a bright but chilly start in the south it is mostly a fine day with sunny spells, and it will turn increasingly warm.

“It will be cooler in Scotland and there will be further showers for the north of Scotland making it feel cooler.

“That trend for warmer and sunnier weather in the south moves more widely northwards as high pressure builds into the weekend.

“High pressure will bring drier brighter and warmer weather to the vast majority.”

Long-range forecasts suggest the foul spell will make way for a golden-rayed run up to the early June Jubilee weekend.

Some experts think it will coincide with a 10-day blazer forecast to kick in from this weekend.

James Madden, forecaster for Exacta Weather, said: “There is the potential for a major spell of summer to develop over seven to ten days during late May and into June.

“Temperatures could reach the mid-20Cs at the very least during this period.

“But before then, there will be some gloomy weather and widespread showers.”

Other forecasters, while agreeing the weather will take an upward turn after mid-week, are hedging their Jubilee predictions.

Weathertrending meteorologist John Hammond said: “We’re closing in on the Jubilee celebrations and that is a long way off and the weather can change a bit between now and then.

“This week things will turn a lot more unsettled before there is a hint of things drying out again before next weekend.

“After mid-week there will be a drying trend with high pressure trying to build in bringing lighter winds and strong sunshine.

“It is going to feel warmer especially across southern parts.”