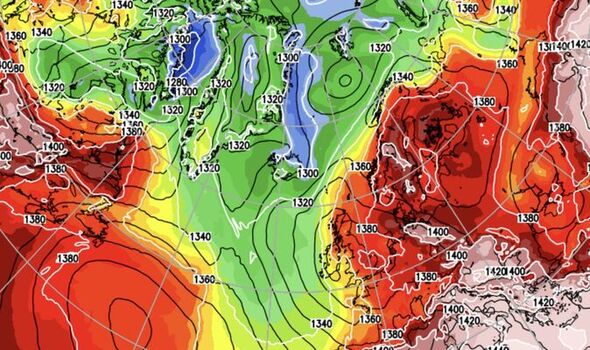 Thermometers will skyrocket through the next 48 hours putting swathes of the UK back on heatwave alert. High pressure stretching from the tropical Azores Islands will split forming a separate ‘anticyclone’ which will settle over Britain. This will draw warm air up from the Continent through the coming days as the nation gears up for another early summer bake off.

Jim Dale, meteorologist for British Weather Services, said: “A ridge of high pressure is currently reaching across the Atlantic from the Azores and affecting the UK’s weather.

“However, this high-pressure system is about to dislocate and form a separate high over Britain, and this will see temperatures rise again this week.

“Thursday is likely to be the peak when we expect to see 29C in parts of the country before values return closer to normal.”

Temperatures across southern Britain will lift into the 20Cs today while northern regions stay cooler in the high-teens.

John Hammond, meteorologist for Weathertrending, said: “On Tuesday there will be some showers some of which will be heavy, but most of us will stay dry during the mid-week period.

“Temperatures will be on the rise and could reach into the mid-20Cs possibly the high-20Cs.”

Low pressure will edge in towards the end of the week to eat away at the high and bring the risk of heavy, thundery downpours, he warned.

He said: “Towards the end of the week it looks like low pressure will take over, and over the weekend there is the chance of some rain coming in, and some of that will be heavy and possibly thundery.”

Scorching forecasts have once again spurred bookies to take the axe to summer heatwave odds.

Ladbrokes this week is offering 1-2 from 4-6 on June entering the record books as the hottest ever.

Spokesman Alex Apati said: “There’s plenty more of where last week’s high temperatures came from if the latest odds are anything to go by.”

Tomorrow will bring highs between 23C and 27C across much of the south as Scotland and the north also turns warmer.

The mercury will hit a scorching 29C in parts of the country on Thursday as ground temperatures hit a pavement-melting 33C.

Southern regions will hold on to the heat through the end of the week while the rest of the country cools down.

As swathes of Britain gear up for the next burst of blazing blue-skied blazing sunshine, showers threaten to dampen spirits elsewhere.

Hot weather this week will be the result of a combination of strong June sunshine and warm air drawn in around high pressure.

The ‘Azores high’ stretches from the southern Atlantic across the Azores Islands, off the coast of Portugal.

Warm air from the Continent, still frying in record temperatures, will circulate around it before wafting into Britain.

Netweather forecaster Jo Farrow said: “There will be a steady increase with temperatures across parts of the UK this coming week.

“They will lift back up into the mid-20Cs for much of England and inland Wales with eastern Scotland also feeling warm.

“The high pressure out in the Atlantic manages to exert enough influence over the UK to keep the fine, settled weather in place.

“Frontal bands will edge into the far northwest bringing more cloud and rain and keeping the temperatures in the mid-teens.”

Pollen levels will remain ‘very high’ in parts of the country through the week brining misery to hay-fever sufferers.

“Wear a hat, cap or other head covering when outside to help prevent pollen particles being caught in your hair.

“And if you have long hair, tie it up. If you want to avoid peak pollen times, avoid going out early morning and early evening.

“Drug-free allergen balms can also be applied to the nostrils through the day.”