Low pressure swept across the UK this weekend, although it slowly started to ease away on Sunday. Most of the UK was battered with rain during the last 24 hours, with the wettest areas being in the east and far north of England. And a new low will strike the northwest of the country on Tuesday, where it will remain for the rest of the week and blast a freezing wind chill of 10C, according to the latest maps on WX Charts.

Net Weather forecaster Paul Michaelwaite warned showers spreading across the UK will be at their most heavy from Wednesday and will push temperatures in coastal areas as low as where 10C to 12C.

He said: “Into midweek, the low pressure bringing that rain will move in and head southeast, spreading the unsettled weather with it.

“Wednesday will see a band of rain trying to move southeast, but probably becoming more patchy as it does.

By Thursday, the low is likely to be close to or right over the south of the country. 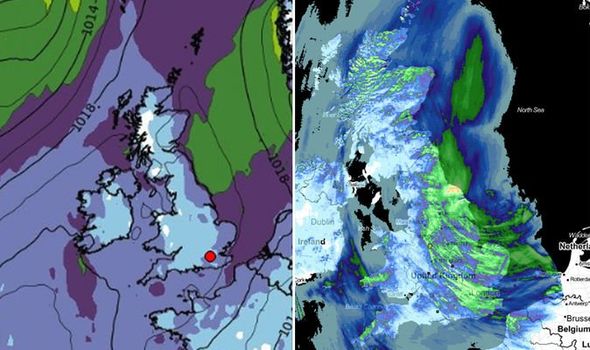 “It’ll bring further showers or longer spells of rain into England and Wales in particular.

“Pressure may be on the rise over the northern half of the country by the latter part of the week, so a more settled picture is possible here.

“However, there is some uncertainty over this as the low, which will hang around near to the south may still extend its influence further north.”

Meanwhile, forecasters at The Weather Outlook added there may be a few sunny spells this week. 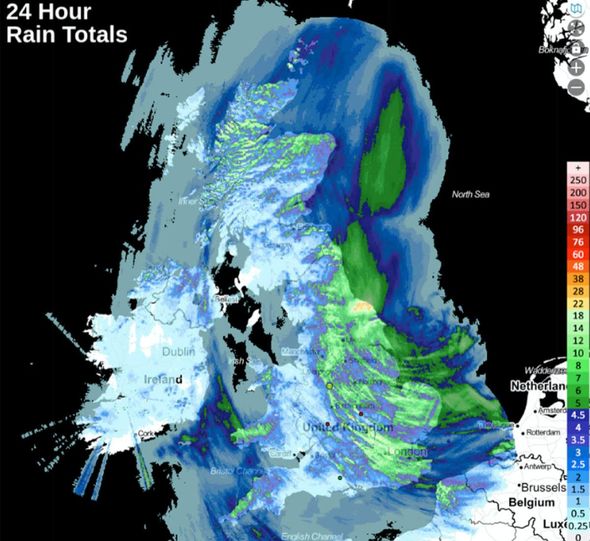 Its latest forecast said: “During Tuesday outbreaks of rain are expected to push into the north west.

“Other parts of the country should have sunny spells and it will feel quite warm.

“Wednesday and Thursday are looking mixed with a risk of showers or longer spells of rain pushing southwards across all regions.

“Through Friday and the weekend there is a still lot of uncertainty. The latest guidance suggests the risk of heavy showers in southern counties. The north may turn drier and warmer.” 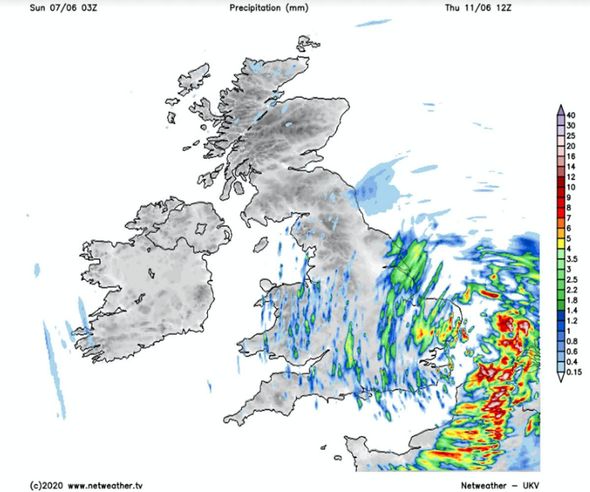 Elsewhere, today will seee a high pressure sweep in before the cooler air arrives in the UK.

Mr Michaelwaite added: “A nose of high pressure will then arrive over the country for Monday, so there’ll be plenty of fine weather with sunny spells developing.

“It’ll still be cool near to eastern coast though, with an onshore breeze still blowing – albeit a lighter one than we’ve seen during the weekend.

“Elsewhere it should feel pleasantly warm in the sunnier spells with temperatures peaking into the mid-high teens. 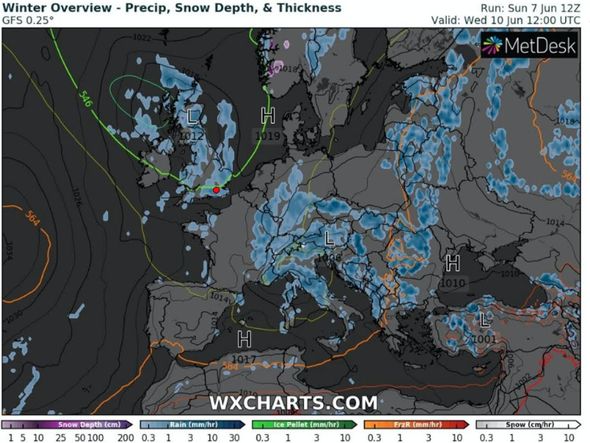 “The southwest of England and perhaps also Wales will see a threat of some showers though.”

The Met Office added Monday will see light showers before heavier rain pushes in later in the week.

A forecast on its website said: “Most parts dry with some sunshine but scattered, mostly light showers may affect eastern coasts and parts of southwest England and Wales. A little warmer for many, especially eastern England.

“Bright for many on Tuesday. Rain into the far northwest spreading to most areas on Wednesday and becoming heavy in places. Somewhat brighter and drier in the north on Thursday.” 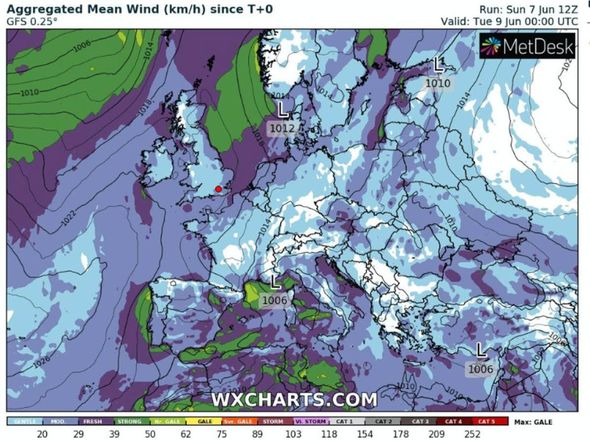 “Later in the day, a band of rain will spread into the north-west of the UK, heavier in Scotland.

“Some uncertainty for Wednesday, but it may become a wet day across the country with rain for many, heavier in the north and west.

“On Thursday, the north could stay mainly dry but the south may see showery rain and freshening winds.”