New weather charts and forecasts predict Brits may have to wrap up warm with temperatures likely to plunge below freezing. One chart shows a swirling vortex of bitter weather stretching from Russia, through Scandinavia and northern Europe, to the UK.

WXCharts’ minimum temperatures charts for 6am on May 1 show temperatures will plummet to -2C in parts of Wales and Scotland.

Other areas across Britain will hit -1C or freezing, with only London and some coastal areas the surrounding area escaping the chill. 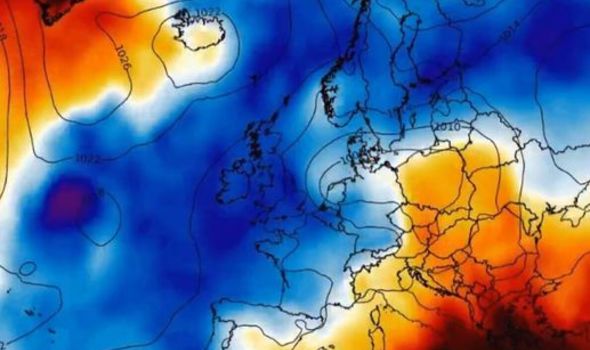 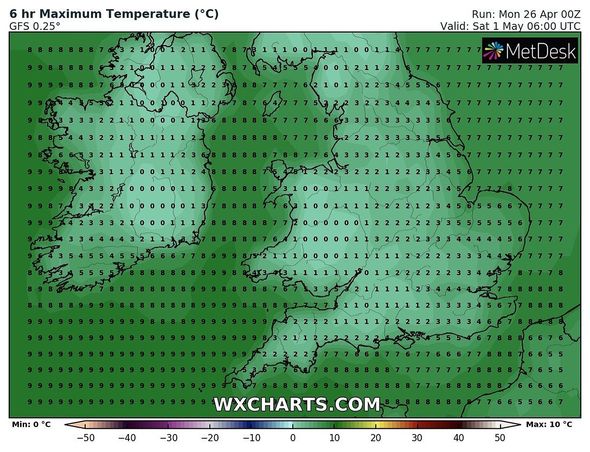 Some areas, particularly in the West Midlands and Wales, will be over five degrees cooler than usual.

Even coastal regions will be between 1 and 2C colder than average.

For gardeners praying for rain after an incredibly dry April, there is not much good news on the horizon.

All areas across Britain will experience between 0mm and 1mm of rain this weekend – a paltry amount after a historically dry month.

The Met Office long-range weather forecast warns there will be an “increased likelihood of more unsettled periods with showers or longer spells of rain” at the start of the weekend.

It added: “Temperatures are likely to be near or less than average for this time of year with a risk of overnight frost in rural areas, especially in the north.” 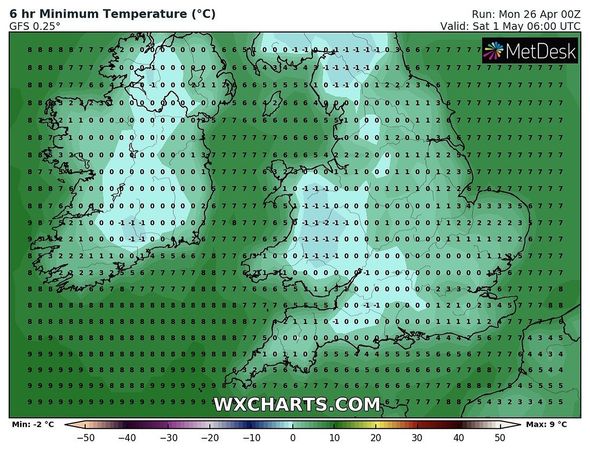 As the day progresses, things will heat up slightly, with Brits enjoying a sunshine and pleasant temperatures after the bitter start.

According to the Met Office, temperatures during the day on Saturday, May 1 will range between 11C and 8C across northern England and Scotland whilst the south of England and Wales will see warmer temperatures of between 13 and 8C.

Met Office forecaster Martin Bowles, added: “Over the next few days temperatures are going to be dropping a bit because they are above average for this time of year.”

The mercury is forecast to hit highs of 16C across the UK later on Monday, dropping to 15C on Tuesday and 13C on Wednesday. 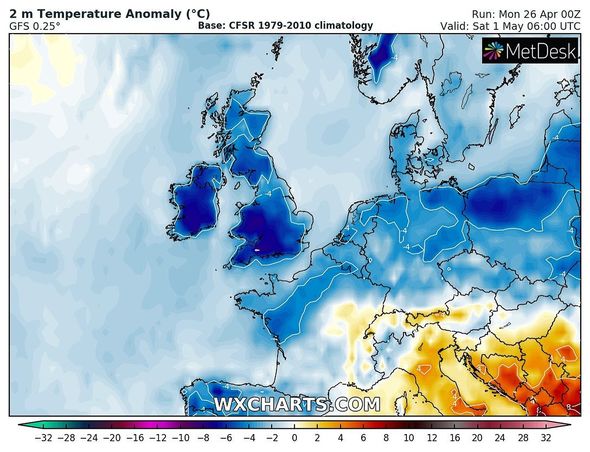 It comes after Brits experienced what forecasters claim has been one of the driest Aprils on record with the UK seeing less than a fifth of the average rainfall for the month so far.

There has been an average of 12.8mm of rain across the UK up to April 22, much lower than the April average of 72.53mm, according to Met Office figures.

A typical April in the UK would have had 70 percent of its rainfall by now, but it instead has just had 18%.

The UK trend comes despite significant cold anomalies currently in place for eastern Europe, with below-average temperatures persisting across much of Europe during April.

Despite this, parts of southern Europe on the other hand are just about clinging to warmer temperatures.