A soggy end to August is on the cards with Storm Francis landing on British shores as we speak. A deep area of low pressure will bring heavy rain and the risk of severe gales in places during Tuesday and Wednesday. Storm Francis follows hot on the heels of Storm Ellen which similarly battered parts of the UK last week.

The Government has put out 21 flood alerts, predominately for the south west and north west of England.

While flood alerts are currently on the lowest level, those in the warning areas are warned to pack a bag of essential items and keep an eye on flood warnings in case they get upgraded.

“Gusts are likely to reach 55 to 60 mph for quite a few places, with exposed coasts and hills seeing gusts of around 70 mph. 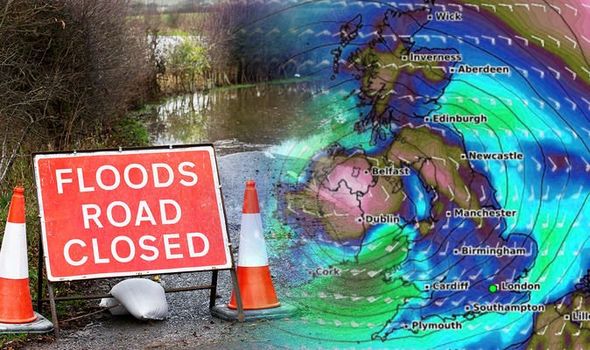 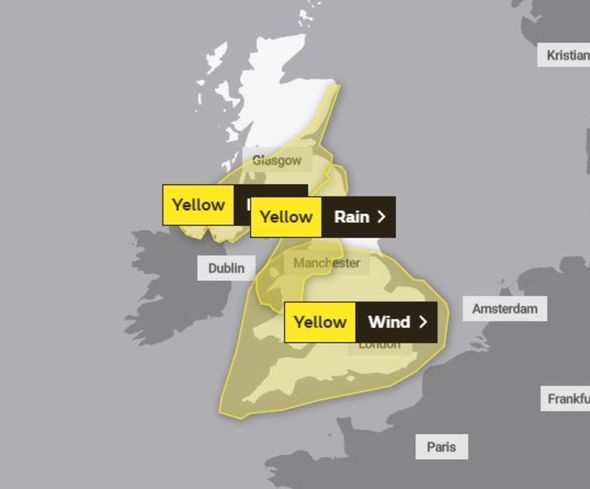 “Whilst not exceptional, winds this strong are unusual for August and they will be accompanied by some heavy rain in places, with possible transport disruption and impacts on outdoor activities.”

Met Office Meteorologist Nicola Maxey added: “Since 2015 when we started naming storms, we have never had to name a storm in August – and now we’ve had two in a few days.

“There are a lot of people on holiday in the UK at the moment, going camping and on walking breaks, many in coastal locations where the winds are likely to be stronger, so it is worth checking on the Met Office website ahead of time.”

In north western parts of England, Northern Ireland and southern Scotland, a yellow weather warning is out for rain, with considerable amounts coming in the next 24 hours. 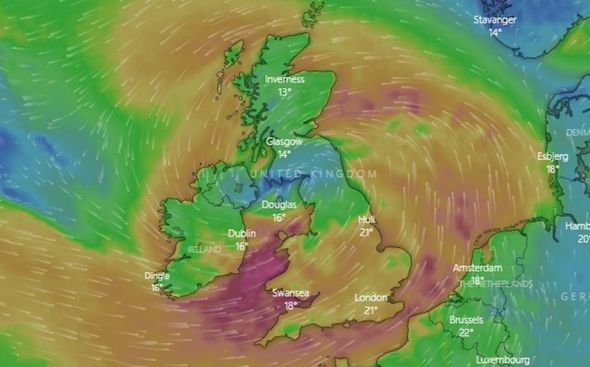 The Met Office report reads: “Total rainfall accumulations are expected to reach 20 to 40 mm widely across the area, whilst over hills larger totals are likely with as much as 60 to 80 mm in a few places.”

All warnings remain in place until 6am on Wednesday.

The BBC’s Carol Kirkwood said the winds will pick up and some travel disruption is to be expected.

She said: “Very strong winds, we just had a gust wind in South Wales at 54mph, in Plymouth recently 50mph.

“Heavy rain as well crossing from the southwest, pushing northeastwards. In the hour between 4am and 5am this morning, just over half an inch of rain fell in parts of Pembrokeshire.

“So as you can see, disruption is likely. Here is the storm, Storm Francis named mid-morning yesterday by the Met Office.

“Look at all the isobars around that area of low pressure. That tells you it’s going to be windy wherever you are today, the wind is continuing to increase through the morning.”

“As well as that, look at all this rain moving steadily northwards and eastwards from across western England, Northern Ireland and Wales at the moment.

“Wherever you see yellows and greens in the chart, you can expect some heavy bursts so there’s a lot of surface spray already on the roads and very large puddles.

“There’s a risk of localised flooding and this will all push northwards, and we will see some more rain as we go through the afternoon. Behind the main band of rain, across southern England, South Wales there’ll be some showers.

“For Northern Ireland, northern England and north Wales and Scotland, we’ve got further rain to come this afternoon with strengthening winds. Eastern parts of Scotland could have gusts of 50mph.

“Some of the trans-Pennines routes won’t be very pleasant if you’re crossing them today so do take extra care if you’re out and about. 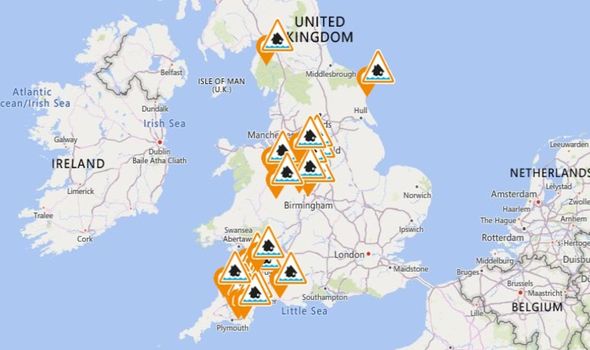 “Temperature wise, fairly academic with all of this going on, but we’ve got 12C in Lerwick to 22C in London.

“And the far north of Scotland will stay the driest for the longest with a littler bit of sunshine.”

By the afternoon, relief will come with some drier and brighter weather being seen across Southern and Eastern England.

Unfortunately for the North of England however, today is set to remain filled with heavy showers and blustering winds overnight.

Temperatures across the UK will stay cool, as Storm Francis brings a chill.

Francis is expected to clear by Wednesday lunchtime, leaving the rest of the week and bank holiday weekend to be settled and brighter.

The bank holiday weekend is expected to remain sunny with some sporadic showers in some areas, before more unsettled weather arrives at the beginning of September.

Where have flood alerts been issued?