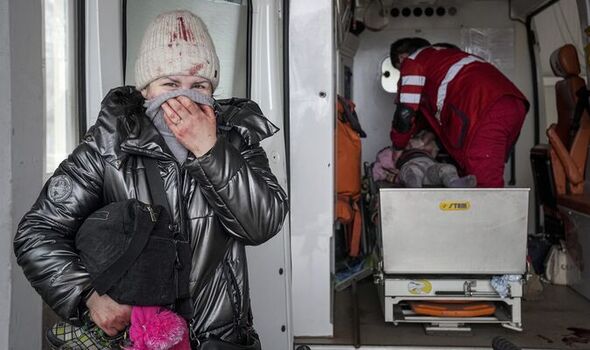 Distressed and covered in blood, a woman – thought to be her mother – waits helplessly as a medic tries in vain to save the life of the six-year-old who is dressed in pink unicorn pyjamas.

A doctor angrily told cameramen: “Show this to Putin.” In another atrocity, Russian ‘saboteurs’ shot dead a schoolgirl called Polina and her parents as they fled in a car. At least 16 children have died since the Russian President invaded Ukraine. Despite peace talks yesterday, a 17-mile column of Putin’s forces moved closer to Kyiv, last night rocked by massive explosions.

But already the Russian leader is being investigated for possible war crimes against humanity.

The UN said more than half a million refugees have now fled Ukraine for various ­neighbouring countries.

Ukraine’s president also announced the creation of an “international brigade” for foreign volunteers wishing to join the military, after “thousands” applied. It came as five hours of peace talks in Belarus ended with no resolution.

Polina and her parents were all killed when they were shot in their family car by Russian soldiers from a sabotage and reconnaissance group, it was said.

Her brother and sister, of unknown ages, both survived the attack and were taken to hospital where they continued to be treated last night.

The images of the girl in the pink unicorn pyjamas show the desperate fight to save the unnamed six-year-old, fatally injured when the Russians shelled her Mariupol apartment block on Sunday.

Clutching her blood-covered hand to her mouth and carrying the child’s slippers, scarf and bobble hat, a woman thought to be her mother watched in horror as attempts were made to resuscitate the little girl in the back of the ambulance.

A man, believed to be the youngster’s father, is said to have held the lifeless child’s hand as a paramedic performed CPR on her tiny body.

A team of doctors then tenderly carried the child into a hospital.

During the failed bid to resuscitate her, an angry doctor turned to the camera and said: “Show this to Putin. The eyes of this child, and crying doctors.”

The Daily Express has decided to publish today’s distressing front page picture to highlight the tragic consequences of the invasion.

More evidence of children suffering came as youngsters being treated at a paediatrics centre had their beds placed in the basement of a Kyiv hospital, which is being used as a bomb shelter.

And women with newborn babies have been forced to take shelter in the basement of a ­perinatal centre in Kharkiv. As the death toll rose, Unicef issued a warning about the ongoing risk to Ukraine’s children.

Afshan Khan, Unicef’s regional director for Europe and Central Asia, said: “Military operations have created significant fear and panic among the Ukrainian population, with families scared and concerned for the safety of their children.

“With the terror of the conflict increasing there are fast-rising numbers of requests for ­psychological support.”

In the UK, Russia’s behaviour was also condemned by the Royal College of Paediatrics and Child Health, after reports suggested an orphanage had been bombed.

Dr Camilla Kingdon, president of the RCPCH, said: “We are deeply disturbed.

“Reports from Ukraine are alarming. We have seen an ­orphanage bombed. A neonatal unit in Dnipro, eastern Ukraine, was forced to move their patients to a basement bomb shelter.

“One of the largest ­children’s hospitals has been directly hit by rocket fire.

“Children are being traumatised and ­separated from their families.” Russian forces were still being held at bay in many areas yesterday and Kyiv last night remained under Ukrainian control, with invading soldiers still some 15 miles away. Kyiv’s heroic residents were forced to bunker down once again last night as explosions rocked the city.

Russian and Ukrainian forces have been engaged in heavy fighting ahead of the widely expected assault on the capital.

In a video message, a defiant Mr Zelensky stressed that “every crime, every shelling by the occupiers bring our partners and us even closer”.

Authorities have been handing out weapons to anyone willing to defend the city, it was said.

Ukraine also said it was releasing prisoners with military experience who want to fight, while training people to make firebombs.

In the war-torn city of Kharkiv, Olena Dudnik, 86, said: “Every day there are street fights, even downtown.

“We are suffering immensely. We don’t have much food in the pantry, and I worry the stores aren’t going to have anything either, if they reopen.

“I just want the shooting to stop, people to stop being killed.”

Meanwhile, Britain has now ­confirmed it is sending more arms to Ukraine and introducing tougher sanctions on Russian banks.

Putin yesterday hiked up interest rates to 20 per cent, as the country’s currency nose-dived.

He also blasted the West’s “empire of lies” while Russia confirmed that the country’s nuclear arsenal had been put on alert.

It also emerged an International Criminal Court prosecutor is to open a probe into possible war crimes or crimes against humanity in Ukraine.

CANCER-stricken children are among those forced into a hospital’s basement to avoid rockets targeting Kyiv, writes Chris Riches.

Okhmatdyt Children’s Hospital is also treating young victims of Vladimir Putin’s intense bombardment of the Ukrainian capital. One six-year-old boy is reported to have died when Russian artillery fire hit the hospital at the weekend.

Dozens of babies and children with serious illnesses are crammed with a single carer into the barren basement, designed by Soviet engineers in the 1970s to withstand potential Cold War battles.

The walls are thick but the shelter is basic, with no beds for adults, or chairs or tables. One young mother said: “Conditions are very minimal, but there is a feeling of security here. I sit on the floor. There are no windows and the walls are thick.

“No one was expecting war, and so no one made preparations here. “That’s why we have only what we have – medications, beds for children, all the necessary stuff.”

Last Friday a cancer centre was in flames after Russian forces opened fire in Melitopol in the south-eastof Ukraine.

And Amnesty International has condemned Russia’s reported use of cluster shells, saying an attack on a pre-school last Friday may constitute a war crime. Amnesty said three people were killed in the attack in Okhtyrka, eastern Ukraine, including a child, while another child was wounded.

Agnes Callamard, the secretary general of Amnesty International, fumed: “It is stomach-turning to see an indiscriminate attack on a nursery and kindergarten where civilians are seeking safe haven. Plain and simple, this should be investigated as a war crime.”