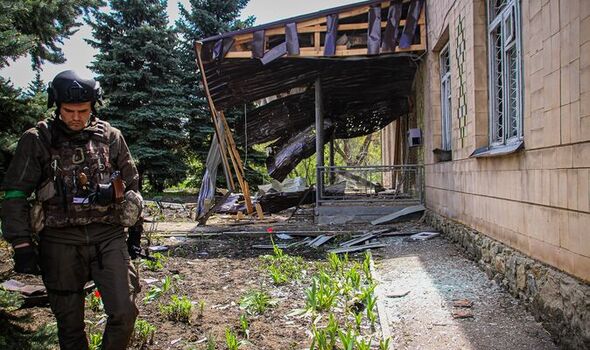 Ukrainian troops in the Dnipropetrovsk Oblast regions are bracing for a wave of attacks in the area, after Zaporizhzhia, a city less than 60 miles south has faced an increasing number of attacks in recent weeks including Tuesday’s shelling of the aluminium plant.

But east of the city, Ukrainian troops are confident of resisting any attacks by Russian forces.

Andriy, the Territory Defence Zaporizhzhya Press Officer for the region told the Daily Express that the Dnipropetrovsk region has faced further attacks from Russian troops.

“There is shelling. We are preparing because at anytime the Russians can attack and have gathered a lot of forces there beside the frontline. [It happens] mostly in the fields, some front groups, some intelligence groups are battling there. The villages are mostly shelled because there can be troops and medical units there,” he said.

Several districts in the Dnipropetrovsk region have almost become military strongholds in preparing for the offensive, with sandbag barricades, deep trenches and armed men manning military checkpoints. So far, Russians have failed to take any of the defence lines in the region he said, but for Zaporizhzhya, he believes it’s a different story.

“It seems like there are no villages are occupied in this district, but in Zaporizhzhya yes, there are four or five parts of Zaporizhzhya district is occupied [by Russian forces],” Andriy said.

As we travel by car across a dirt road, plumes of smoke can be seen in the distance because of both incoming and outgoing fire. Andriy reassures us, but the closer we get, the more explosions of outgoing fire can be heard above us.

We approached one soldier of Ukraine’s Territorial Defence, who said he would speak to us anonymously.

“Two villages from here there are a lot of [Russians], they are trying to break through constantly. They are using tanks, aviation and artillery. A day before yesterday, this hold-up was shelled. Almost three cars were destroyed. Earlier we had closer fights, and direct contact on the outskirts from here,” he said.

Another soldier called Kuchyk said their position is considered a frontline because of the heavy artillery fire the Ukrainian unit has been facing.

“Right now we are at the frontline. We are not going well unless the artillery works,” he told the Daily Express.

Multiple explosions continue in the background. But Commander-in-chief “Jakson” escorted us to a shell attack on one of their holdouts. On the ground, a large hole had been formed from Russian attacks, a sign the fighting was getting worse.

“A few days ago this wasn’t the case,” the chief commander said.

On the outskirts of the village, trenches are dug in deep in preparation for a major Russian offensive.

One sergeant, who names himself “Robson” after his admiration for former Manchester United footballer and Middlesbrough manager Bryan Robson, said the trenches were designed professionally by engineers to withstand heavy damage. But he hoped the Ukrainian soldiers further east would be able to fend off any advance.

“There is fighting over there, 15km away as he points to the smoke in the distance. The frontline is across three districts around 90km. We are considered to be the third line but the distance between is only about 2km.

“The most intense fighting was between 18 and 24 of April. Mostly it is artillery fights, and Grads. We had information that 10,000 troops were coming and we were going to be against in Luhansk and Donetsk districts,” he added.

Russians are ”advancing in Dnipropetrovsk”

The Dnipropetrovsk Oblast in central and eastern Ukraine is the most important industrial region in the country, and vital to the economy.

Ivan Vertsyuk, a Ukrainian analyst and blogger of Mission 61, said Kremlin troops are advancing further into the region.

“In the Dnipropetrovsk region, the Russian army is advancing with the troops that were previously stationed in Crimea. From Crimea, Russian soldiers move upwards, in the northern direction – to Kherson, Zaporizhzhya and Dnipropetrovsk,” he told the Daily Express.

“Zaporizhzhya is another important location for Russians since the Zaporizhzhya – Mariupol highway that is the main traffic route in south-eastern Ukraine – either for military or humanitarian needs. If the Russian army will be able to block Zaporizhzhya, Mariupol and all the towns and villages around might start having problems with food supplies,” he added.

Reports say Russia holds 70 percent of the Zaporizhzhya region. The city is home to Europe’s largest nuclear power plant, (ZNNP), which is also now under Russia’s control after it was captured in March. Zaporizhzhia has also faced an increasing number of shelling attacks in recent weeks including Tuesday’s shelling of an aluminium plant.

The city has also become a popular reaching point for residents fleeing the besieged city of Mariupol, which Moscow says is now under its control.