The UN agency said it feared the death toll of the 200,000 mostly Syrian refugees living in the city could rise. 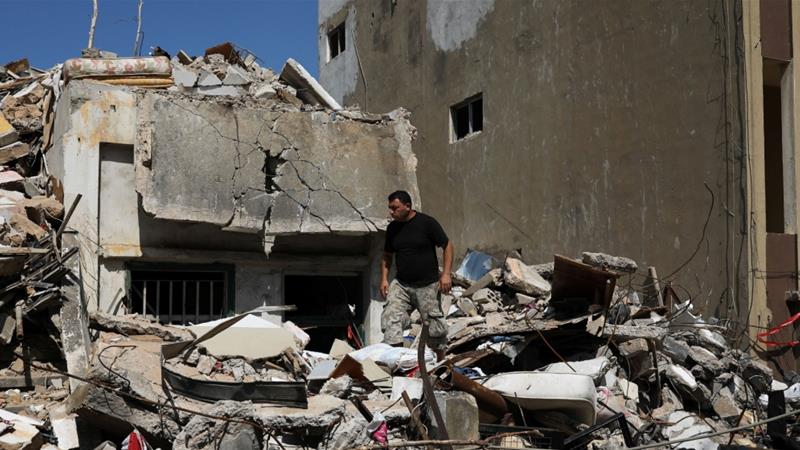 The United Nations’ refugee agency says it is working to verify reports that at least 34 refugees are among some 200 people killed in a massive port explosion that devastated Lebanon’s capital a week ago.

The agency was looking into, but had not immediately independently verified, the reports of 34 refugees killed.

“We fear the death toll among Beirut’s refugee population of some 200,000 could rise further,” the UNHCR said.

There are more than 884,000 registered Syrian refugees living in Lebanon, with many fleeing the neighbouring country’s ongoing civil war, which began in 2011, according to UNHCR.

When accounting for unregistered refugees, that number is about 1.5 million, according to aid groups.

Last week, about 2,750 tonnes of ammonium nitrate, which had been stored at Beirut’s only port for six years, ignited, causing a devastating blast that destroyed property several kilometres away.

Ahmed Staifi said his wife, Khaldiya, and his youngest and oldest daughters – Jude, 13, and Latifa, 24 – who had fled Syria six years ago had died when the three-storey building where they lived collapsed.

Staifi said his family had escaped the war and believed they had found refuge in Lebanon, where he was already living and working as a labourer.

“My wife had called me and said, ‘Ahmed, I’m fleeing the war and coming to you’,” the Syrian father of four told Reuters news agency. “Death followed her here.”

Beyond the growing death count, the explosion wounded more than 6,000 people and rendered an estimated 300,000 people homeless.

The UNHCR said its immediate humanitarian response covers the “the entire community”, including Lebanese citizens, refugees and migrants workers.

It said its first estimates indicate that up to 10,000 “vulnerable household” have been severely affected and are in need of urgent support.

The disaster has also sparked a new series of protests in the country, with many residents already at a breaking point over a protracted economic crisis, corruption, and governmental dysfunction and waste.

On Monday, Lebanon’s Prime Minister Hassan Diab quit along with his cabinet, calling the catastrophe a result of endemic corruption.

Many questions remain over why the shipment of ammonium nitrate docked in Beirut in late 2013. Even more quizzical is why such a huge stash of dangerous material, used in bombs and fertilisers, was allowed to remain there for so long.

On Tuesday, Reuters news agency, citing a senior security official, reported that a judicial investigation in January had concluded that the dangerous chemicals needed to be secured immediately.

The official told the news agency that President Michel Aoun and Diab had been notified in a letter of the possibly catastrophic danger.

The letter had followed a string of memos and letters sent to the country’s courts over the previous six years by port, customs and security officials, repeatedly urging judges to order the removal of the ammonium nitrate from its position so close to the city centre, the news agency reported.

Tags: 34, at, least, of, Reports, UNHCR:
You may also like
Recent News:
This website uses cookies to improve your user experience and to provide you with advertisements that are relevant to your interests. By continuing to browse the site you are agreeing to our use of cookies.Ok