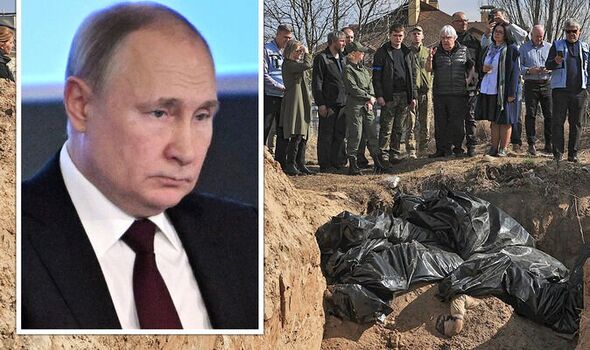 The removal from the council came as a result of a US-led General Assembly vote. 93 nations voted in favour of the move.

It is the latest move to limit Russia’s power and presence on the world stage, following President Vladimir Putin’s invasion of Ukraine over a month ago.

Since the conflict began, reports have emerged of alleged war crimes committed by invading Russian troops on Ukrainian civilians.

Russian forces have been accused of deliberately and indiscriminately firing on civilian targets, of targetting humanitarian corridors and medical facilities.

Early on in the war, the International Criminal Court said that it would begin investigating potential war crimes in Ukraine.

World leaders including Boris Johnson have formally accused Putin’s regime of being responsible for war crimes.

Suspensions from the council are rare. The last nation to be take off it was Libya in 2011, over violence against protesters by forces loyal to Colonel Gaddafi.

The resolution adopted by the 193-member General Assembly draft expresses “grave concern at the ongoing human rights and humanitarian crisis in Ukraine”.

According to a note seen by Reuters, Russia had warned countries that voting any other way than to block the suspension would be viewed as an “unfriendly gesture”, with consequences in diplomatic ties.

Russia had used its place on the council to be one of the most vocal members, and is expected to attempt to subvert the suspension to get its messages across.

A diplomat said: “They would probably still try to influence the Council through proxies.”

Last month the council opened an investigation into allegations of human rights violations in Ukraine.

The General Assembly has already adopted two resolutions denouncing Russia for its invasion of Ukraine.

Each of those votes has garnered 141 and 140 votes respectively.

Prior to today’s (Thursday) vote, the US said it would seek the suspension after Ukraine accused Russian troops of killing hundreds of civilians in Bucha, a satellite city of Kyiv.

Human Rights Watch among others accused Russia once again of committing war crimes in Ukraine.

Russian mouthpieces have so far denied the alleged atrocities against civilians.

On Tuesday, Vassily Nebenzia, Russia’s ambassador to the UN, said that while Bucha was under Russian control “not a single civilian suffered from any kind of violence”.

Yet, verified satellite images show bodies left on the same street in Bucha over a week before Russian forces left.

Ukrainian President Volodymyr Zelensky told the UN Security Council the same day that there were “many more cities like Bucha”.

He added that “the world has yet to see what [the Russian military] has done in other occupied cities and regions of our country”.

On Monday, the Prime Minister said that the uncovering of further mass graves outside the capital was a “sickening” revelation, adding that the UK “will not stand by whilst this indiscriminate and unforgivable slaughter takes place”.