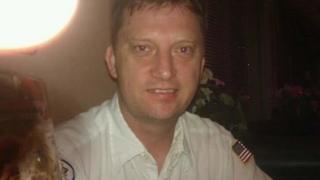 A US Navy veteran is returning home after being freed from detention in Iran, his family says.

Michael White was sentenced to prison last year on unspecified charges, but was released temporarily on medical grounds to the Swiss embassy in March.

He was arrested in 2018 after travelling to meet his girlfriend in the city of Mashhad.

The news comes days after an Iranian scientist detained in the US was deported.

Sirous Asgari, a materials science professor from Tehran, had been charged in 2016 with trying to trade secret research from an American university, but was acquitted in November. Both the US and Iran have denied the release of the two men is linked.

“For the past 683 days my son, Michael, has been held hostage in Iran by the IRGC and I have been living a nightmare,” Mr White’s mother said in a statement.

“I am blessed to announce that the nightmare is over, and my son is safely on his way home.”

She thanked the US state department and Swiss diplomats for their work on the case, and asked for her family’s privacy to be respected.

Mr White was one of at least six US citizens either imprisoned in Iran or out on bail.

He was granted medical furlough to the Swiss embassy in March amid the release of large numbers of prisoners due to the spread of coronavirus in Iran.

His family said that he had visited the country a number of times before he was detained.

Tags: from, home, Ir, on, US, veteran, way
You may also like
Recent News:
This website uses cookies to improve your user experience and to provide you with advertisements that are relevant to your interests. By continuing to browse the site you are agreeing to our use of cookies.Ok