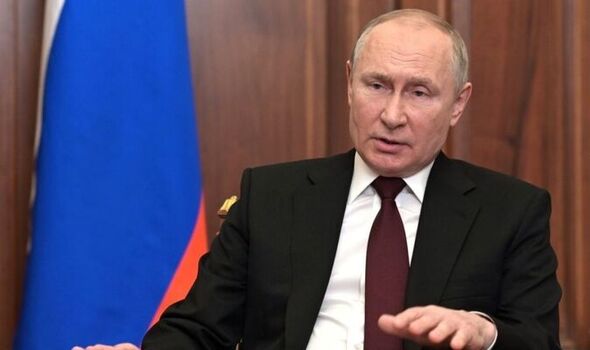 They fear Vladimir Putin could resort to high-power thermobaric weapons – dubbed the “father of all bombs” – as Ukrainians resist his attempts to take control of Kyiv.

There are also concerns that units that are running behind schedule as they encounter stiff opposition could resort to indiscriminate shelling as a terror weapon.

Thermobaric weapons, also known as vacuum bombs, are high-powered explosives that use the atmosphere itself as part of the explosion. They are among the most powerful non-nuclear weapons ever developed.

A thermobaric bomb dropped by the US on the Taliban in Afghanistan in 2017 weighed 21,600lb and left a crater more than 1,000ft wide after it exploded 6ft above the ground.

Thermobaric weapons were developed by both the US and the Soviet Union in the 1960s. In September 2007, Russia detonated the largest thermobaric weapon ever made, which created an explosion equivalent to 39.9 tonnes.

The US version of the weapon reportedly costs more than $16million (£12m) each.

One official said: “My fear would be that if they don’t meet their timescale and objectives they would be indiscriminate in their use of violence.

“They don’t adhere to the same principles of necessity and proportionality and rule of law thatWestern forces do.”

While Russian special forces have reached the suburbs of Kyiv, the bulk of Russia’s heavy armour is believed to be more than 30 miles away from the capital.

Western officials have suggested Russia will kill Ukrainian President Volodymyr Zelensky and his ministers if they seize Kyiv.

Mr Zelensky said: “I am target No1, my wife and children are No2.”

Russia is launching a massive amphibious assault to bring thousands of navy personnel ashore, as Kyiv puts up a more aggressive defence than Moscow expected.

Russian personnel sailed through the Sea of Azov, coming in west of Mariupol, a senior US defence official said. The amphibious assault represents a significant ramping up of the conflict, as the Russian navy has until now played a largely supporting role.

Putin has staged two amphibious attacks – the other is in Crimea and could land troops in Odesa.

The US has counted 200 Russian missile attacks so far.

While most have been launched toward Ukrainian military installations, some have hit civilian areas.

The senior US defence official said yesterday that Russia appears to have lost some of its momentum due to the Ukrainian’s fiery resistance. “We do assess that there is greater resistance by the Ukrainians than the Russians expected,” the official said. Ukraine’s command and control of its military “remains intact”.

“[Russia is] not moving on Kyiv as fast as what we believe they anticipated they would be able to do. That said, they continue to try to move on Kyiv.”

The official also said several hundred Americans had left Ukraine over the past few hours.

Still, Putin has only mobilised about onethird of the troops he has stationed at the

Ukraine border, the official said. Few expect Ukraine to emerge victorious from what is almost certain to be a prolonged, bloody, and vicious war – but so far, Kyiv’s forces have managed to inflict heavy losses.

Extremely brave individuals have been playing their part too. A Ukrainian was pictured trying to block a Russian military convoy in one of many courageous acts against the onslaught.

Hero soldier Vitaly Skakun Volodymyrovych blew himself up to destroy a bridge and try and stop Russian forces from storming in from Crimea. And 13 guards protecting the small Zmiinyi Island told Russia where to go before they were killed.

In total 137 civilians and military personnel were killed in Thursday’s attacks.

He claimed Western nations were “watching from afar” while his country was “left alone” to fight off Putin’s rampaging army.

He added: “Who is ready to fight alongside us? I don’t see anyone.

“Who is ready to give Ukraine a guarantee of Nato membership? Everyone is afraid.

Was Russia convinced by yesterday’s sanctions? We hear in our sky and see on our earth that this was not enough.”

Britain has already trained and armed Ukrainian forces and is expected to send more weaponry. Around 18,000 guns have been given to volunteers in the country, according to its interior ministry.

The Ukrainian government has called on its citizens to make Molotov cocktails – petrol bombs – to launch at Russian forces as they close in.

The petrol bombs are being left at roadsides, ready to throw at enemy troops.