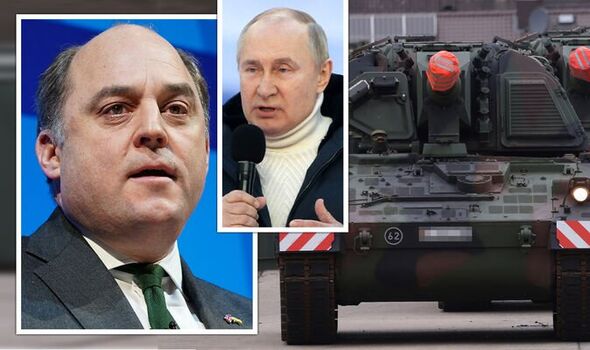 Chief of the Defence Staff Admiral Sir Tony Radakin also revealed Vladimir Putin made the “insane” decision not to tell members of Russia’s armed forces that they would be invading Ukraine.

Admiral Radakin said Putin has already lost the war, adding “the scenes coming out of Mariupol and elsewhere are horrific, and the coming weeks will continue to be very difficult,”

Announcing the West will send Ukraine armoured vehicles, artillery weapons and anti-aircraft guns, Mr Wallace said: “President Putin is not the force he used to be. He is now a man in a cage he built himself.

“His army is exhausted, he has suffered significant losses. The reputation of this great army of Russia has been trashed.

Ukraine has sent dozens of buses to the devastated city of Mariupol which has endured some of the worst atrocities in the war.

Around 170,000 people are thought to still be stranded without food, water or medicine in the strategic Black Sea port city, which has been under constant bombardment and siege by Russian forces for more than a month.

Ukrainian interior ministry adviser Vadym Denysenko warned the southern city of Mariupol and a “corridor” between two eastern towns, Izyum and Volnovakha are now the key battlegrounds in the Russian invasion.

He added: “(Russia) is withdrawing forces in the Kyiv region, but it’s too early to say that the same is happening in the Chernihiv region.”

The International Committee of the Red Cross said the evacuation of Mariupol was planned for Friday, and that “the lives of tens of thousands of people in Mariupol depend on it”.

“For logistics and security reasons, we’ll be ready to lead the safe passage operation tomorrow, Friday, provided all the parties agree to the exact terms,” a spokesperson said.

Prime Minister Boris Johnson had hinted at sending Ukraine armoured land rovers to help with the evacuation of Mariupol.

He said: “There will be more lethal aid going into Ukraine as a result of today.

“Ukraine needs longer range artillery and that’s because of what the Russian army has been doing which is now digging in and starting to pound these cities with artillery.

“They are obviously looking for equipment to defend its coastline because of Russian activity down there and we’ll be looking to see what more we can do.

“They are also looking for armoured vehicles of some types, not tanks necessarily, but certainly protective vehicles, and more anti-air. All of this will be forthcoming as result of this conference.”

Mariupol resident Diana Yalovets, a 23-year-old student, said: “As we tried to get out, we needed to cross the city centre. It was scary to see destroyed streets and buildings.

“My school was destroyed. It’s painful to see your once beautiful city this way.”

“Mariupol was a safe city. We loved to walk near the sea. There was a park, and it was an amazing place just to sit and talk. I just can’t believe we lost everything we had.”

Energoatom said two columns of Russian forces had set off towards the Belarusian border, leaving just a few at the site.

The agency said it had also confirmed information that Russian troops had built fortifications including trenches in the so-called Red Forest – the most radioactively contaminated part of the zone around Chernobyl.

As a result of concerns about radiation, “almost a riot began to brew among the soldiers”.

Speaking at an Institute for Government event, Admiral Sir Tony Radakin said: “You’ve seen it at the most junior level, which is shocking in a professional sense, that Russian officers might take people into combat and those people don’t even know they are going into combat – it seems an insane thing to do professionally and it’s a morally bankrupt thing to do for any individual.”

The department predicted “heavy fighting” would continue to take place in the Kyiv suburbs in the coming days.

“We are starting to see the early indications of those forces being moved back from Kyiv and retreating to both Russia and Belarus.

“That in itself is a difficult evolution for Russia because they are doing that under contact, so Ukraine armed forces will attack those Russian forces as they retreat.”

He added: “Like all authoritarians, he allowed himself to be misled as to his own strength, including the effectiveness of the Russian armed forces.

“What is very clear is that Putin is a weaker and more diminished figure today than he was a month ago.

“And, conversely, Nato is stronger and more united today than at any time I can remember.”