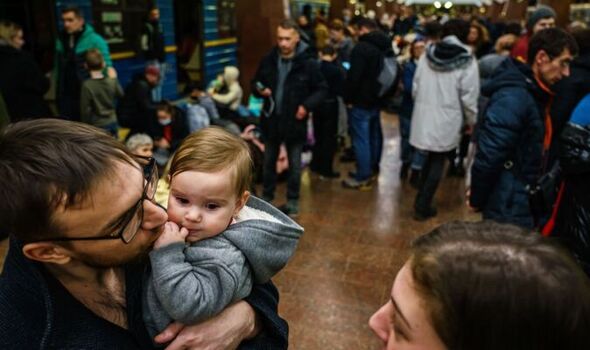 Families in Severodonetsk are not yet fleeing as they fear they could “blunder” into advancing Russian forces, a journalist in the region warned.

British writer Askold Krushelnycky, who is of Ukrainian heritage – speaking from Severodonetsk – said that civilians in the eastern Ukrainian town were willing to fight after it came under shellfire yesterday morning.

Mr Krushelnycky, a journalist for The Times, told the Daily Express: “The Russians, as far as I understand, have been dropping Special Forces behind Ukrainian lines or even close to the capital Kiev.”

“So there is no sense in moving just blindly westwards because you might blunder straight into the Russians.”

“Lots of Ukrainians, especially here in the east, didn’t think of the Russians as enemies before 2014.”

“They never thought there would be war.”

“There’s a joke here that we should build Putin a statue because he’s done more to cement national unity than any Ukrainian president.”

He added: “I went down to the reception of the hotel where I am staying to ask where the basement was.”

“This town was occupied by pro-Russian forces in April 2014 and in July, Ukrainian forces fought with them – a very fierce battle – for over a week and drove them out.”

He went on: “The people here have already experienced occupation by pro-Russian forces.”

“They seem to be telling the truth when they say to me that they are not running. They’ve come here once before, we’re not going to let them come for a second time.”

“They are not afraid of confronting Russians on the ground.”