At America’s northernmost mosque, in Anchorage, nightly potlucks will let Muslims celebrate iftar together over foods from around the globe.

Maleika Jones and Saaima Sadiq practiced making a tomato-based biryani ahead of Ramadan, which begins on Saturday in the United States.Credit…Ash Adams for The New York Times

Last week, Maleika Jones was still waiting for a package of Ramadan decorations. In her preparations for the monthlong holiday, which in the United States begins on Saturday, she ordered festive lights and trimming to hang up for her family’s celebrations as they break the fast each night.

“Of course, even though it’s an Amazon order, it takes several weeks to get here,” she said.

Ms. Jones lives in Anchorage, home to Alaska’s only mosque — some 6,700 miles west of Mecca, in a commercial district of the city, next to a sports bar and an insulation contractor’s office, with views of the Chugach Mountains.

The mosque — the northernmost in the country — is also the heart of a growing Muslim community that is preparing to gather for Ramadan for the first time since the pandemic began. The roughly 2,500 Muslims in the Anchorage area come from all over the world; they’re immigrants, refugees, locals, veterans, students and others, all sharing a faith and a love of food.

The Muslim community “is quite a diverse population, but then we’re all able to come together on the common grounds of our faith and traditions, the core traditions,” said Ms. Jones’s husband, Gregory Shuaib Jones, an electrician. “The different ethnic groups may have some slight variations in the style of their cooking or the style of their dress, but the core is there.” 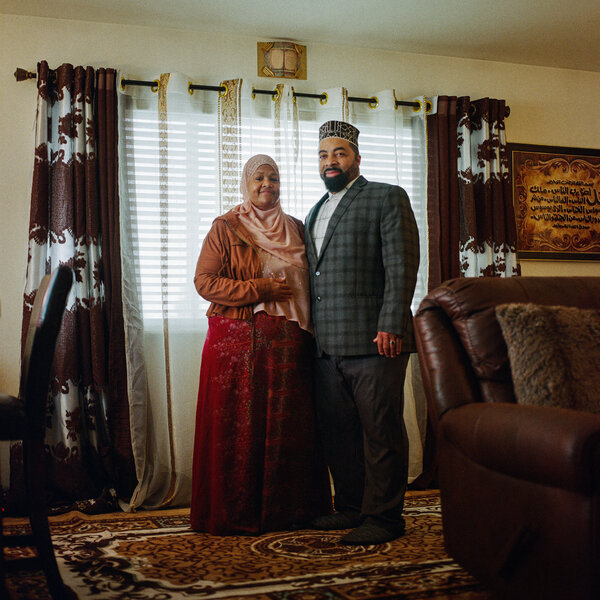 The Joneses moved to Anchorage from South Carolina in 2009 with the purpose of teaching people about Islam. Both are members of the Anchorage Interfaith Council, and Ms. Jones is the co-chair.

Anchorage is one of the nation’s most ethnically diverse cities, with more than 100 languages represented in its public school system. People often move to the area as part of the military, as new immigrants or as refugees — many from the Democratic Republic of Congo, Somalia, Sudan, Cuba, Iraq and Bhutan. Most recently, 100 refugees from Afghanistan have settled in the area.

Heather Barbour, a lawyer and a leader in local Muslim circles, said the mosque — formally, the Islamic Community Center of Alaska, Anchorage — has members from 40 to 50 countries.

“I love the fact that there are so many different cultures and people from all over the world, and I think that makes Anchorage a very rich city,” she said. “The Muslim community is kind of a microcosm of that. You take that diversity and you kind of shrink it down and that’s the mosque.”

This diversity can lead to some conflicts and differences of opinions, but Ms. Barbour said it is one of the community’s greatest strengths.

“If you go somewhere like Chicago or New York, you’ll find different mosques,” she said. “You’ll find a Pakistani mosque or an Arab mosque or an Albanian mosque. It’s a mosque, but it’s infused with the culture of the place. We don’t have that ability. It really kind of forces us to try to stay true to the religion and not let different cultures influence how we do things.”

Anchorage’s location can pose complications for Ramadan. During the holiday, Muslims around the world forgo eating from dawn until sunset every day of the month — breaking the fast with a feast called iftar. Ramadan dates vary year to year, following the Islamic lunar calendar. This year, Ramadan falls in the spring in the Northern Hemisphere, and in Alaska that will mean fasting from 5 a.m. to about 6:30 p.m.

But when the holiday falls in the summer or winter months, the northern cities of the world must accommodate different fasting times. Anchorage experiences about 22 hours of daylight during the summer solstice; winter solstice brings very little light — only about five hours. To work around such extremes, Muslims in far-northern countries are given special permission to adopt the timetable of Mecca. (Some Alaskan Muslims choose to follow the local sunrise and sunset.)

Mr. Jones said that when he moved to Anchorage, he talked to local Muslims to learn about time adjustments in the summertime, because it was difficult to complete three of the five prayers that are timed between sunrise and sunset. “You’ll be getting all your prayers in between 11 a.m. and 2 a.m., and that’s just not a normal lifestyle,” Mr. Jones said.

The Anchorage mosque has been a work in progress for more than a decade.

For about 35 years, members rented retail space in a strip mall. In 2008, after a fund-raising effort, the group bought a plot of land off one of the city’s main thoroughfares. And because paying interest on a loan is forbidden in Islam, the mosque had to be built piece by piece as the group collected enough money.

The community moved into the building in 2011. Youssef Barbour, a physician and a spokesman for the center, said the mosque is nearly complete, with only the minaret and an elevator left to add.

Despite the bigger space, the building can feel crowded on Fridays and during the holidays, when 700 to 800 people gather for special Ramadan services.

That growth in the Muslim community is reflected in the increasing availability of halal food in the city.

When Sajid Raza moved to Anchorage in 2016 to do graduate research at the University of Alaska Anchorage, he said it was hard to find halal food, particularly meat.

“At the time, there were just a couple of restaurants, like one Indian restaurant and one pizza place,” said Mr. Raza, who now lives in Bozeman, Mont. “There was one grocery store, and it was bringing mostly frozen meat from Seattle, but it was quite expensive because of transportation costs and stuff.”

“That’s a remarkable development for the Muslim community, because that means that the halal is becoming more and more mainstream throughout America,” Mr. Jones said. “Alaska being so remote, we may be probably one of the last communities to get it.”

Still, certain ingredients remain difficult to find. Alaska imports 95 percent of its food, and pandemic-related supply-chain disruptions continue to hinder the regular delivery of goods to the state.

“Most people, if they are from different parts of the world, whether it’s Senegal or Pakistan, people bring those spices in,” said Ms. Jones, who does the same when she visits her family in South Carolina. “A lot of people that go back and visit their hometowns, they bring the spices and things here.”

Stocking up on spices and other ingredients about a month ahead of time is an important part of preparing for Ramadan in Alaska. Finding enough frozen halal meat is also important. A neighbor of the Jones family hunts, killing each animal according to the Islamic law and ritual that makes the meat halal. Recently, the neighbor shared halal caribou meat with Ms. Jones.

Families will buy rice, lentils, flour, vegetables for soup dishes, and dates — an ingredient that is likely found in every Muslim home in Anchorage, despite cultural background. Medjool dates — the “big fat, gooey ones, the really good ones” — are becoming easier to find at Costco during Ramadan, Ms. Barbour said. Eating dates is a traditional way to break the fast.

“This is a time where we start preparing mentally, spiritually, financially — buying certain types of foods that we may not eat throughout the year,” Ms. Jones said.

Ms. Jones is also working with other women from the mosque to practice making dishes ahead of the holiday. Last week, Ms. Jones made lamb biryani and curried chickpeas and chicken with a friend from Pakistan.

Ms. Jones has also been watching online videos to learn how to make foods, like samosas, that she can freeze ahead of time.

“When you break the fast, it’s so nice and refreshing to have different types of appetizers and finger foods and things like that already on the table,” she said. “It would be too hard to sit here and roll out 20 pieces of bread when I break my fast, you know, versus already having it put together in the freezer.”

Though Ramadan is a month of prayer and reflection, it is also a joyful time for Muslim families, and iftar gatherings are a highlight of the holiday. Before the pandemic, Anchorage’s Muslim community met nightly to break the fast over big potlucks.

“People think about food during the fasting day,” Mr. Barbour said. “So food becomes like — you are thinking about what you are going to eat today? People sometimes actually gain weight because of how much emphasis is on food, but it is a nice season for enjoying a nice meal.”

During these potlucks, people fill their plates at the buffet table. “Most people have no idea who brought what or what it is,” Ms. Barbour said. “Everybody eats everything, and it’s just a real mishmash, which is really awesome.”

Women in the community have also hosted smaller gatherings at their homes once or twice a week. This year, Ms. Jones and her daughter Shumailah are planning on making kebabs, roti, fruit with yogurt and a large batch of potato and meat-filled samosas for their iftar gatherings.

“During Ramadan, that’s the time where people really try to roll their sleeves up and bring out the best dishes,” Ms. Jones said.

With few Covid-19 restrictions, the community is looking forward to evening potlucks on Fridays and Saturdays.

“Everybody misses it, and everybody’s really excited to be seeing each other again,” Ms. Barbour said. “Sharing food, that’s one thing that’s just across pretty much every culture that brings people together. That’s the common language, to sit down with your friends and community members. It’s a very relaxed, very happy time. And, we have really missed it.”