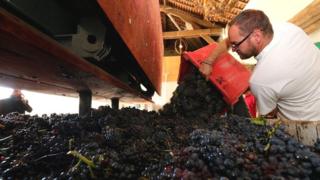 It’s been an exceptional year in Champagne.

The weather has been near perfect, with plenty of sunshine and rain falling at just the right time to give the vines their necessary oomph. The grapes in this famed French region are bursting with expectation for an early harvest.

But never in living memory have market conditions been so poor.

A billion bottles have been left idle in cellars. Weddings and business jollies have been cancelled because of the pandemic. Ultimately, who feels like celebrating when there’s a potential virus on the lip of every cut-glass flute?

These factors have led to plummeting demand and ignited tensions in the hundreds of wine villages around Reims and Epernay of a kind not seen since World War Two.

“Covid has left everything reeling,” says Bernard Beaulieu, a champagne producer and former head of the CGT Champagne winegrowers union. “The fall in sales is staring us in the face. It’s hastened a crisis that, if you ask me, has been a long time coming.”

These tensions will likely come to a head at a meeting on 18 August, when a decision must be made on how many champagne grapes each of the roughly 15,000 growers is allowed to put on the market.

Uniquely in French wine, the champagne region follows a “single-yield” rule. This means all growers, or vignerons, agree to sell only a fixed amount of grapes per hectare. Any surplus is left to rot in the field or is turned into a refrigerated “reserve” for use in case of poor future harvests.

There is always haggling between the growers and the négociants – the 300 or so dealers who buy up grapes for the prestigious champagne houses such as Bollinger, Krug and Mumm.

But this year things have reached fever pitch.

On the one hand the négociants, who are represented by the Union des Maisons de Champagne (Union of Champagne Houses), want a low yield of around 700kg (1,543lb) per hectare – about 200m bottles – in order to spare themselves the cost of stocking millions more litres of unsold fizz.

But the vineries want a bigger yield of around 8,500kg. The union representing them says this is the minimum amount that would allow the growers to stay financially afloat. It is less worried about unsold stocks and says the current exceptional conditions are too good to miss.

In the fraught pre-harvest atmosphere neither union is giving interviews. But observers are troubled by the signals that are emerging ahead of the 18 August meeting.

For Mr Beaulieu, the crisis lays bare fault lines that have been building for years.

“The crisis in demand long pre-dates Covid,” he says. “In France, young people are drinking less and less wine and there is growing competition from prosecco and other sparklers.

“But the other crisis is the growing imbalance between the big houses and the small producers. By offering high prices, the houses have lured more and more vignerons into selling them all their grapes.

“As a result there are fewer independent producers, and at tense times like this it is the rule of the big houses and their financial backers that prevails.”

Yves Couvreur, an independent producer, is downbeat about the prospect of the crisis resolving itself anytime soon. “Far from finding an arrangement that pleases everyone, it looks like they’ll settle on one that pleases nobody,” he says.

But for all the gloom, in Champagne a sense of historical perspective is always useful.

After all, the business has been going strong for around 300 years. It has survived wars, revolutions and depressions – and it is not as if today’s champagne has any serious rival as the liquid emblem of joy.

If only the world were a little more joyful.

Tags: bubble, champagne, France's, Why
You may also like
Recent News:
This website uses cookies to improve your user experience and to provide you with advertisements that are relevant to your interests. By continuing to browse the site you are agreeing to our use of cookies.Ok