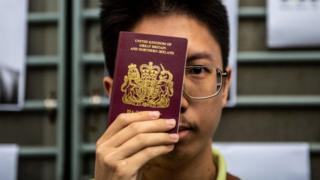 The UK has said it is considering more rights for holders of a special passport issued to some people in Hong Kong.

The territory, which used to be a British colony, was handed back to China in 1997. Anyone born before then is eligible to apply for a British National (Overseas) passport, known as a BNO.

If China implements a controversial proposed security law, people holding the BNO, could get a “path to citizenship”, the UK said.

What is the BNO and who has one?

The BNO passport is essentially a travel document that does not carry citizenship rights with it – although you are entitled to some consular assistance outside of Hong Kong and China with it.

It was issued to people in Hong Kong by the UK before Hong Kong was handed over to China.

Around 300,000 people currently hold a BNO passport, allowing them to visit the UK visa-free for six months. An estimated 2.9 million people are eligible for a BNO passport, said the British Consulate General in Hong Kong.

Though it gives the passport holder the right to remain in the UK for up to six months, it doesn’t automatically allow them to reside or work there. They also aren’t allowed to access public funds, including things like government benefits.

BNO holders cannot pass this status on to their children.

What is the UK proposing – and why?

China on Thursday formally approved a plan to impose controversial national security legislation in Hong Kong. It could go into effect as early as the end of June.

Hong Kong was handed back to China, on a number of conditions. These include the region’s high level of autonomy and maintaining certain rights like freedom of speech that do not exist in mainland China.

But this new plan, if put into law, would make it a crime to undermine Beijing’s authority in Hong Kong, and many are concerned it could end Hong Kong’s unique status.

The move triggered a wave of criticism around the world, with many – including Chris Patten, the last governor of Hong Kong – urging the UK to stand up for the territory.

Later on Thursday, UK Foreign Secretary Dominic Raab said the country would move to scrap the six-month stay limit for BNO holders if China goes on to officially implement the law.

Mr Raab said that BNO passport holders would be allowed to “apply to work and study for extendable periods of 12 months and that will itself provide a pathway to future citizenship”.

What difference could it make?

As a way to help people in Hong Kong who would rather not stay there if the new security laws are implemented, it might prove more symbolic.

For starters only a small percentage of people in Hong Kong currently have a BNO.

But also, the people who the security laws are aimed at – the young anti-mainland protesters who have been getting into violent confrontations with police for months – are not likely to be eligible for the BNO because of their age.

Additionally, though the BNO gives the passport holder the right to visit the UK for up to a year potentially, it’s not clear what other benefits the extension might bring, or if the UK would make it any easier administratively for those already in the country to apply for work or study.

On social media, some Hong Kongers dismissed it as a gesture that amounted to little more than a 12-month tourist visa.

Effectively, it means that those who come to stay in the UK for a year, and who have the funds to be able to extend this enough, could eventually be eligible to apply for citizenship.

It cuts out some of the administrative hoops BNO holders would have had to jump through before this move if they wanted this path.

How has China reacted?

China has firmly opposed the move by the UK, saying it is a violation of the handover agreement that stipulates BNO passport holders do not enjoy UK residency.

China has repeatedly warned Britain to stay out of its affairs in Hong Kong.

The Chinese ambassador to the UK Liu Xiaoming had previously accused some British politicians of viewing Hong Kong “as part of the British empire”.

Tags: angering, Chin, risks, The, UK, Why
You may also like
Recent News:
This website uses cookies to improve your user experience and to provide you with advertisements that are relevant to your interests. By continuing to browse the site you are agreeing to our use of cookies.Ok